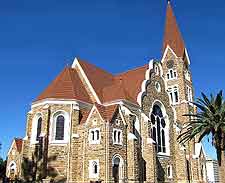 Many of Namibia's main tourist attractions hark back to a time of German colonial occupation. It was a period when grand buildings sprang up, creating distinctive landmarks on the urban landscape, not just in Windhoek but also around other large towns and cities in Namibia.

This country has much more to offer, though, than just its plentiful historic sites. It can boast a multitude of other tourist attractions, including hot spring resorts, national parks and gardens, and even an old diamond mining town (Kolmanskop). And of course, the beaches of Namibia can be surprisingly appealing, particularly those based along the rather special Skeleton Coast. 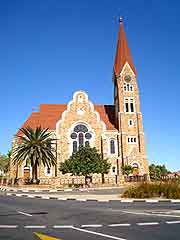 Address: Fidel Castro Strasse / Robert Mugabe Avenue, Windhoek, Namibia, NA, Africa
Tel: +264 061 236 002
This striking church, situated on a traffic island in the middle of Robert Mugabe Avenue, is one of Windhoek's leading visitor attractions and was formerly known as the Church of Peace. Built from quartz sandstone in the first years of the 20th century to accommodate the city's German Lutheran congregation, this historic Lutheran church is a mixture of neo-Romanesque, art nouveau and Gothic influences. The spire dominates the structure and measures in at just under 25 metres / 82 feet in height, coming with its very own imported German clock. Interestingly, the stained-glass windows were a present from the German Emperor, Wilhelm II.
Open hours: Monday to Friday - 07:30 to 14:30, guided tours are available
Admission: free 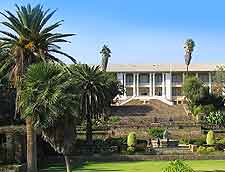 Address: Robert Mugabe Avenue, Windhoek, Namibia, NA, Africa
Tel: +264 061 288 5111
Situated opposite the Christuskirche in Windhoek, the Tintenpalast was designed by leading German architect of the time, Gottlieb Redecker, and built in 1913. Since then, it has been used variously by Namibia's governments, and today, houses the National Assembly of Namibia. The Tintenpalast is said to have gained its nickname - the Palace of Ink, because of the sheer volume of ink used by government officials within! The palace's landscaped gardens, officially named the Parliament Gardens, have become a popular place for a lunchtime picnic.
Open hours: Monday to Friday (tours of the building available by phone reservation only)
Admission: free 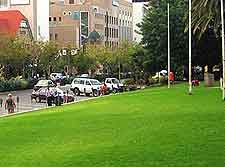 Address: Corner of Independence Avenue / Fidel Castro Street, Windhoek, Namibia, NA, Africa
This landscaped public park lies at the heart of Windhoek, both in geographical and social terms. It is easy to see why, as the park offers plenty for visitors to do. As well as a children's play area and pond, the park hosts open-air theatre performances, amidst the giant palm trees. Despite its name, Zoo Park is no longer home to animals (other than a statue which depicts a prehistoric elephant kill, thought to have taken place over five centuries ago on this very spot). The last animal left the park in the 1960s.
Open hours: daily
Admission: free

Address: Gobabis, Namibia, NA, Africa
Tel: +264 062 568 788
Located within the easterly town of Gobabis, just over 100 km / 62 miles from the border with Botswana and alongside the Kalahari Desert, the Harnas Wildlife Foundation is one for all the family. This zoo-like attraction is called home by numerous injured and orphaned creatures, with lion cubs and baby cheetahs a familiar site and often being small enough for visitors to hold. Proud of its conservation achievements, the foundation actively works on several different projects, such as its Harnas Lifeline, Animal Care, the Wild Dog Project, Community Development and the Bushmanland Project. Volunteers are always welcomed and accommodation is provided in the guise of full-board cottages and chalets, as well as a camping site.
Open hours: daily
Admission: free, charge for accommodation

Address: Old Brewery Building, 40 Tal Street, Windhoek, Namibia, NA, Africa
Tel: +264 061 242 222
This popular arts centre is based in the Old Brewery, a building that was once better known for producing 'Windhoek Lager'. The arts complex showcases contemporary crafts by local designers, including a selection of jewellery, textiles and traditional hand-woven baskets. An onsite theatre and craft café, which caters for vegetarians, are also based within the centre.
Open hours: daily
Admission: free 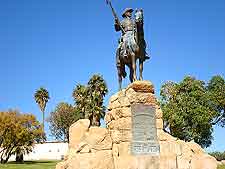 Address: Softball Street, Windhoek, Namibia, NA, Africa
A variety of spectator sports and events are regularly staged at Windhoek's Independence Stadium, such as rugby games, football matches, netball tournaments and athletics. Capable of accommodating some 25,000 people, this large stadium is easy to find by following the B1, heading roughly 2 km / 1.5 miles to the south of downtown Windhoek. Nearby attractions of the same ilk include the National Rugby Stadium, the Softball Union, the Union Hockey Fields, the Olympia Swimming Pool and a sports centre. Of note, the Independence Stadium should not be confused with the city's considerably smaller Sam Nujoma Stadium, which was completed in 2005 and holds just over 10,000 spectators.
Open hours: hours vary according to event
Admission: charge

Address: Orban Street, Windhoek, Namibia, NA, Africa
Tel: +264 061 202 2011
Designated as a nature park in 1970, Namibia's National Botanic Garden has been left in pretty much its natural state. The garden is mainly home to plants and trees that are native to the Windhoek area, although other Namibian species are being gradually introduced. Evocatively named plants include Quiver Trees, Bottle Trees and the Bushman Poison plant. If you are interested in the garden's succulent plant collection, the best time to visit is when they are in flower, during April and May. The garden is criss-crossed by a network of paths, with maps of the garden and a tagging system making it relatively easy to navigate your way around and identify plants and trees. However, if you are particularly keen to pick the brain of an expert botanist, the Botanical Society of Namibia holds guided walks of the garden once a month. The garden has picnic tables and benches, making this an ideal place to enjoy an al fresco meal.
Open hours: Monday to Friday - 08:00 to 17:00, first Saturday of the month - 08:00 to 11:00
Admission: free (charge for guided walks) 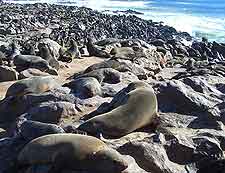 Address: Cape Cross, Namibia, NA, Africa
Cape Cross was discovered by the Portuguese back in 1486. However, it wasn't until 1884 that the cape's seals, a species of sea lion, were spotted for the first time, during Germany's colonization of Namibia. Today, Cape Cross is home to one of the largest colonies of Cape Fur Seals in the world and now ranks amongst Namibia's most popular tourist attractions. During the breeding season, which starts in mid- to late-October, thousands of seals come to shore, making for an amazing sight. Visitors can observe seal pups playing in the surf, their mums lying on the shore and their dads fighting to hang onto their territory. Whilst there are picnic facilities at the Cape, you would need a strong stomach to take advantage of them, as the seals do emit an extremely pungent smell!
Open hours: daily - 10:00 to 16:00
Admission: charge

Address: Otjiwarongo, Namibia, NA, Africa
Tel: +264 067 302 121
If you are interested in crocodiles and visiting the Otjiwarongo area, then a trip to this crocodile farm is a must. The farm is home to approximately 50 crocodiles, reared for meat and skins, and for breeding. Guides are on hand to help with any burning crocodile questions you need answered. And to round off your visit, there's even a croc-based menu to be sampled at the farm's restaurant.
Open hours: daily - 09:00 to 17:00
Admission: charge

Address: Omaruru, Windhoek, Namibia, NA, Africa
Tel: +264 064 570 083
The only winery in the whole country is located at the town of Omaruru, where a mixture of white and red grapes are grown, harvested and fermented. A number of different wines are produced at the Kristall Kellerei Winery, including cabernet and blanc de noir, with wine tasting being available. A restaurant is on hand should you wish to stop for a light lunch, and you can also stay for an evening meal if arranged in advance. Be sure to try the unusual cactus schnapps, which is something of an acquired taste.
Open hours: Monday to Friday - 10:00 to 22:00, Saturday - 09:00 to 14:00
Admission: free 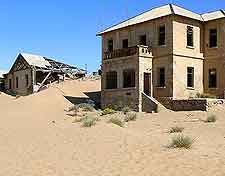 Address: Luderitz, Namibia, NA, Africa
Tel: +264 061 202 719
At the turn of the 20th century, diamond fever hit the town of Luderitz and nearby Kolmanskop found itself at the heart of Namibia's flourishing gem industry. But just as soon as the crowds arrived, more lucrative diamond mines were found elsewhere and the place fell into disrepair. In short, it became nothing more than a ghost town. Today, Kolmanskop is a popular tourist attraction in its own right, with regular guided tours.
Open hours: guided tours at 09:45 and 10:45
Admission: charge

Address: Fish River Canyon, Namibia, NA, Africa
Tel: +264 061 285 7200
In the Nama language of Namibia, Ai-Ais literally means 'burning water'. Fortunately for visitors to the thermal baths, which are fed by nearby sulphurous hot springs, the temperatures are cooled off to a pleasantly warm 40°C /104°F. The resort's thermal spa is open during the winter months only, as the extreme temperatures during the summer preclude visits. The waters are thought to be restorative for rheumatism sufferers. This resort also offers a range of leisure facilities, including indoor and outdoor swimming pools.
Open hours: daily, it is worth noting that it can be extremely hot between October and March (summer season)
Admission: charge

Address: Near Okahandja, Namibia, NA, Africa
Tel: +264 061 285 7200
A short distance from Okahandja, the Gross Barmen Hot Springs resort is a great place to break a long journey, whether you are headed for the coast or to one of Namibia's national parks. The site was originally a mission station, the ruins of which can still be seen in places, while the current resort was built in the late 1970s. Today's visitors come to Gross Barmen to relax in the healing hot mineral waters, which bubble up from the ground at a steamy 65°C /149°F and are maintained at a more moderate 38°C / 100°F to 42°C / 108°F. The resort has a large thermal bath as well as an indoor swimming pool to cool down in. There are also dining and sports facilities onsite.
Open hours: sunrise to sunset
Admission: charge