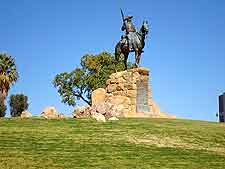 For most visitors, Windhoek is often seen as just a point of entry to Namibia, a stopover before heading elsewhere. It is rather a shame because the city and the surrounding Central Highlands really do have a great deal to offer.

Those who have time to linger for a day or two will discover that Windhoek is a busy and reasonably prosperous city. It also has a fairly laid-back feel and is proud of its reputation for being one of the safest cities in Africa. 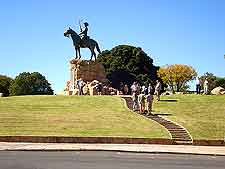 Whilst Windhoek may appear to have embraced modernity with open arms, the city's colonial past is still clear for all to see.

On closer inspection, visitors will soon become aware of a distinct German influence, from the architecture of some of Windhoek's buildings right down to the food delivered to its restaurant tables. Such a mix of European-style culture and African atmosphere give Windhoek its life and soul. 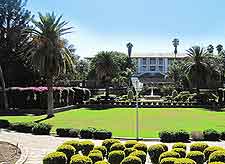 Whilst there's some debate as to whether the name of Namibia's capital city means 'wintry corner' or 'windy corner', one thing is certain - Windhoek's hot springs have attracted settlers for centuries, including the likes of Jonker Afrikaner in 1840. The city we know today has its origins in the late 19th century.

In 1884, the South West Africa territory was declared as a German protectorate. A garrison was stationed in Windhoek and the first stones of the Alte Fest laid down. At first, Windhoek remained little more than a small garrison town. Then, settlers came in their droves and towns and castles were built. After the Second World War and following Namibia's independence from South African rule in 1990, the development of Windhoek has gathered pace. 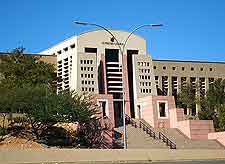 Today, Windhoek is spread out over a relatively wide area and, with only 300,000 or so people living here, it does feel like there's plenty of space to move. The city centre district of Windhoek, however, is fairly compact. Indeed, it is perfectly reasonable to expect to stroll around the centre during the course of a few hours and take in all the major sights.

'Old Windhoek' gravitates around Independence Avenue and Fidel Castro Street. Here, you can expect to see the best examples of German colonial architecture in Windhoek, including the Alte Feste, Christuskirche and the Tintenpalast. Many of Windhoek's historic buildings are now used by government administration, including the State House (home to Namibia's President), the Turnhalle (home to the National Council) and the Haupt-Kasse (home to the Ministry of Agriculture). 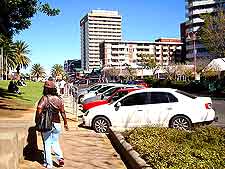 The residential suburbs are anything but compact, extending some 15 km / 10 miles from north to south. For visitors to Windhoek, the smallest and most popular out-of-town district is nearby Klein Windhoek. Windhoek North is also a well-to-do area of the city. Other districts include the Southern Industrial District, where many of the city's bars and night clubs can be found. Windhoek's residential suburbs, which include Khomasdal, Katatura, Oschland Park and the Informal Settlements, are a far cry from the high rises and colonial buildings of the city centre.

Tourist attractions in the Namibian capital include the Gibson Meteorite Fountain, the Tintenpalast, the old Lutheran church of Christuskirche, and several museums and galleries, such as the National Art Gallery of Namibia. The National Botanic Garden, the Zoo Park and the Namibia Craft Centre are also popular with visitors to Windhoek.