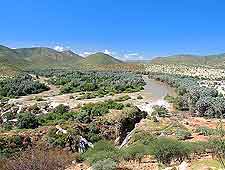 Think of Namibia and most people will inevitably envisage endless sand dunes and a coastline littered with the monuments of wrecked ships. Look more closely, however, and you will soon see that Namibia offers so much more, including a variety of man-made and natural landmarks, often being based around Windhoek.

Spectacular waterfalls, dramatic canyons and mountains, as well as a number of large meteorites, are all there to see and enjoy. Perhaps the most impressive of the country's natural wonders is the Fish River Canyon, which is also the second-largest gorge in Africa. The Twyfelfontein World Heritage Site is another spectacle and comes with a rich prehistoric heritage. 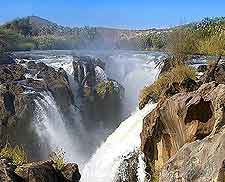 Address: Namibia, NA, Africa
The Epupa Falls are situated on the Kunene River, in the far north-west of Namibia. They comprise a series of waterfalls with a total drop of 60 metres / 197 feet. At their widest point they measure 500 metres / 1,640 feet. Whilst they may not be the largest falls in Africa, they are no less dramatic, rising out of the dusty desert landscape. Once you've enjoyed looking at the falls, you can spend time swimming in the pools that have formed at their base.
Open hours: daily
Admission: free 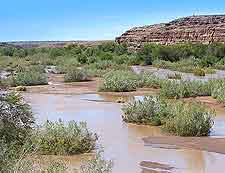 Address: Namibia, NA, Africa
The Fish River runs for 600 km / 372 miles from the Central Highlands to the Orange River, winding its way through a vast canyon that at its widest point, measures up to 8 km / 5 miles across. As you would expect in an environment that is mostly made up of bare rock, wildlife is not in abundance. However, eagle-eyed visitors may be able to spot the odd mountain zebra, rock dassie (hyrax) or chacma baboon. The Fish River Canyon is a magnet for experienced hikers, although it should be noted that the main trail is only open between May and September.
Open hours: daily
Admission: free 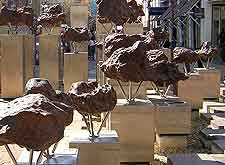 Address: Post Street Mall, Windhoek, Namibia, NA, Africa
Post Street Mall forms the very heart of the shopping scene in Windhoek, with its easterly side being where you can find the Gibeon Meteorite National Monument. This extraordinary structure is made up of some 33 octahedrite meteorites mounted on numerous steel plinths - in total the structure weighs in at 21 tonnes. The meteorites are believed to be around 600 million years old. Their discovery was first recorded in 1838, but it wasn't until 70 years later that they were collected for display. The meteorites come from a meteorite shower which fell over southern Namibia, thought to be the largest such event anywhere in the world.
Open hours: daily
Admission: free

Address: Omaruru, Windhoek, Namibia, NA, Africa
The Franke Tower remembers the German military captain Erich Victor Carl August Franke (1865 to 1936), who attacked Omaruru in 1904 following a 900-km / 560-mile march. Franke led forces to suppress an uprising by the Herero forces and was victorious in his mission, receiving German military honours for his actions. Omaruru's German people duly erected this tower, now a national monument, which offers superb views across the townscape.
Open hours: daily
Admission: free, those wishing to climb the tower may need to collect the necessary key from the Central Hotel 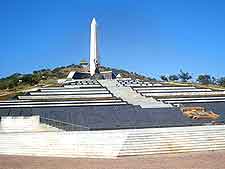 Address: Near Windhoek, Namibia, NA, Africa
Located just a short distance from Windhoek, at the foot of the Auas Mountains, lies Heroes Acre. This grandiose memorial, with its marble obelisk and statue of an unknown soldier, was inaugurated in 2002 by the then state president, Sam Nujoma. Intended as a national symbol and to stand as a memorial to those who gave their lives during the fight for Namibia's independence, Heroes Acre is home to the tombs of 174 Namibian heroes.
Open hours: daily
Admission: free 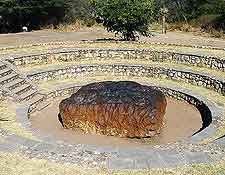 Address: Grootfontein, Namibia, NA, Africa
Hoba is one of the biggest meteorites in the world, thought to have collided with Earth roughly 80,000 years ago and discovered in 1920. The statistics are impressive. Whilst over-enthusiastic souvenir hunters have reduced the meteorite's dimensions somewhat, it still measures a sizeable 3 metres / 10 feet in length and weighs around 60 tonnes. The meteorite is thought to have 'bounced' along the ground to its eventual resting place, explaining perhaps why there's no vast impact crater as such. Today, the rock is a National Monument of Namibia. As such, it rests very neatly in its own specially made amphitheatre.
Open hours: daily
Admission: charge 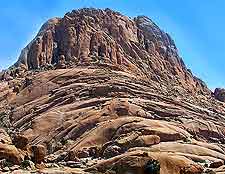 Address: Near Usakos, Namibia, NA, Africa
Rising above the desert plain between Windhoek and Swakopmund is Spitzkoppe. At its highest point of 1,800 metres / 5,905 feet, this series of huge granite peaks has become popular with rock climbers, earning itself the nickname of 'Namibia's Matterhorn'. The mountain's highest peak was first reached in 1946 according to records, and today it is accessible to experienced climbers during the winter months. Spitzkoppe also attracts hikers, who can admire the fascinating flora that grows in this area. Whilst many of the bushman paintings around Spitzkoppe have been destroyed, a few good examples still remain at the base of Great Spitzkoppe.
Open hours: daily
Admission: charge 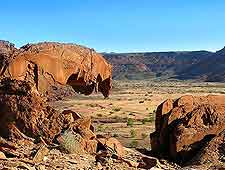 Address: Twyfelfontein, Namibia, NA, Africa
The valley at Twyfelfontein in the north-west of Namibia has been inhabited for over 3,000 years. Evidence of these prehistoric folk can still be seen today, preserved as one of the largest displays of rock art in Africa. In 2007, the collection of 2,500 rock engravings became a UNESCO World Heritage Site. The paintings were first discovered when the area was being mapped in the early 1920s. However, it wasn't until the 1940s that the paintings could be examined more clearly. A spring that delivered an unreliable source of water was discovered here around that time and the site thus gained its name, which translates as 'questionable spring'. In 1950, the rock works of art were more scientifically identified. Following damage to the paintings, unsupervised hiking in the vicinity is no longer allowed. An information centre, with toilets and a viewing platform, has been set up.
Open hours: daily
Admission: charge

Address: Keibeb Farm, Grootfontein, Namibia, NA, Africa
Whilst there's no doubt that Namibia has a profusion of baobab trees, Tree 1063 is a particularly fine specimen, being located approximately 60 km / 37 miles to the north of Grootfontein. This giant baobab boasts a trunk with a circumference of just under 20 metres / 66 feet, while its branches stretch for more than 12 metres / 39 feet. If you happen to be passing through the Grootfontein area, it is worth heading to Keibeb Farm to take a look.
Open hours: daily
Admission: free