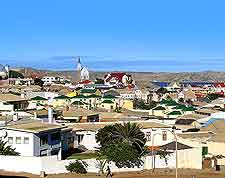 The Republic of Namibia resides within Southern Africa, where its westerly border is fronted by the South Atlantic Ocean. Many attractions lie along this coastline, including (north to south) the Skeleton Coast Park, Terrace Bay, Torra Bay, Henties Bay, the National West Coast Recreation Area, Swakopmund, Walvis Bay, Luderitz, the Namib Naukluft Park and Oranjemund.

Located in the very heart of Namibia is Windhoek, the capital city, while other significant Namibian destinations include Keetmanshoop, Luderitz, Ondangwa and Oshakati, Outjo, Swakopmund, Tsumeb, Tsumkwe, Walvis Bay and Warmquelle. Tourists may also like to check out the Brandberg Mountains, the Fish River Canyon Park, Kaokoland, Opuwo, Sossusvlei, Spitzkoppe and the Waterberg Plateau Park, as well as the Bwabwata, Etosha, Mamili and Mudumu national parks.

Windhoek resides within the Khomas district, where it is bisected by the busy Independence Avenue. Much of Windhoek's administrative business is carried out around Independence Avenue, with its Gustav Voigts Centre store being a good place to shop for maps and pick up some souvenirs. Further shopping opportunities are centred around the Post Street pedestrian mall.