Namibia Weather, When to Go and Climate Information 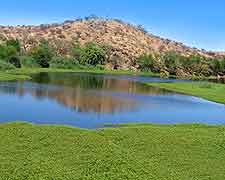 Visitors to Namibia should bear in mind that temperatures and rainfall do vary considerably depending on the region and the time of year you plan to visit. Namibia has a mostly desert climate, although in the north of the country the climate is more tropical in nature. In all, the country enjoys around 300 days of sunshine per year.

During the summer, from October through to April, temperatures around inland Namibia can rise to roughly 34°C / 93°F. This time of the year is the wettest, with most of the rainy weather occurring between November and March. 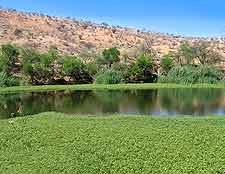 Winter months, from May to September, are cooler inland, with temperatures in the daytime reaching a maximum of 26°C / 79°F. Temperatures fall during the evening and night-time temperatures that fall below freezing are a fairly common occurrence. There's virtually no rainfall during the winter, and clear skies are an added benefit of visiting at this time of year for those who don't mind the cooler temperatures.

Aside from the seasonal differences in the weather and climate, temperatures and rainfall also vary depending on which region of Namibia you are visiting. In the southern part of the country and along the coast, for example, there is minimal rainfall. In the more tropical north-eastern area, however, tropical summer rains occur frequently. Extremely high temperatures aren't unknown in the most southerly and northerly points of Namibia. Along the coast, temperatures tend to be more moderate, ranging from 15°C / 59°F to 25°C / 77°F. Coastal fog during the night is also common.