Getting Around, Marrakech Travel, Transport and Car Rental 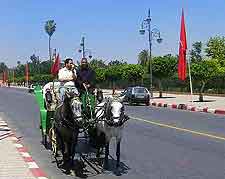 Marrakech has an international airport and is the main route in, with the majority of visitors travelling here by air. Other transport options heading into Marrakech include Eurolines buses, which travel direct from many European cities, such as London, and trains via Casablanca, suiting those who are already in Morocco.

You could also drive here via Spain car ferry, but those who require wheels while in Marrakech would be better off flying and renting a car at the airport. Taxis and bus travel are the public transport on offer within the city and quite affordable. 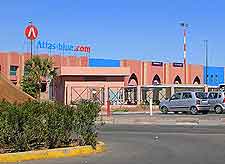 Address: BP 13201, Marrakech, Morocco, MA
Tel: +212 024 444 7865
Marrakech Menara International Airport is located just outside the city centre and is the main gateway into this former Moroccan capital city. Although international flights are quite limited, budget airlines easyJet (from London and Madrid), Ryanair (from London), and Thomsonfly (from Manchester) all travel here. You can also get here from the UK through British Airways via London Heathrow and Gatwick airports. The main option for many is to fly via Casablanca. If your hotel does not offer courtesy shuttle transport, taxis and public buses are readily available at the airport, as are hire cars. 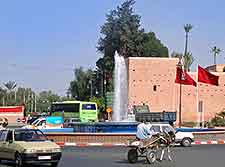 You can drive to Marrakech, via car ferry from Spain, although flying here and hiring a car at the airport is better advised. Local roads are pretty good, but traffic can be a nightmare and driving is often rather a hassle, especially if your hotel does not offer parking. Major car hire companies are represented at Marrakech Menara International Airport for those who want to hire cars, and booking online is the best method of picking one up to save on time and money. 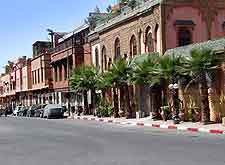 You can get here from Europe by bus with Eurolines, and there is even a service between London and Marrakech. Supratours also operate bus transport from mainland Europe. Travelling within Marrakech by bus is done with the national bus firm CTM, as well as the lesser known companies. The main bus station is on Place el Mouarabitène, in the north of the Old City, and most services start and end here. Services travel all over and there is a dedicated route between Guéliz and Jemaa El Fna. Fares are paid direct to the driver. 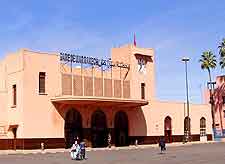 You can travel into Marrakech by using train transport from Tangier, Casablanca, Rabat, and Fez, and the rail network is quite reliable. Services are cheap and come in all day from Casablanca to the city's very own train station on Avenue Hassan II, west Guéliz. Going first-class in the air-conditioned cars is recommended. There are limited rail services actually on hand within Marrakech itself.

Standard un-metered Marrakech taxis (petites taxis) are generally small Fiat Unos and prices need to be negotiated before setting off. For more comfort in better vehicles (usually old Mercedes) go for the grand taxis, which have fixed routes and rates. Unlike the standard taxis, they generally can't be hailed and should be taken at designated stands, like the bus station, the post office, and at Djemaa El Fna Square. Horse-drawn carriages in the city are available and a rather touristy way to travel around.