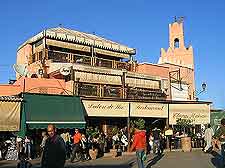 Morocco has an interesting and tasty cuisine, and an absolute glut of eateries in all parts of the city. Additionally, the city of Marrakech caters well to tourists, with plenty of Spanish and Italian restaurants, and local Moroccan dining venues.

Although a Muslim nation, drinking for non-Muslims is not a problem in Marrakech, and there are many late-night bars and nightclubs where you can let your hair down after dining out at one of the city's plentiful restaurants. If you prefer to stick to non-alcoholic beverages, don't miss the ever popular mint tea. 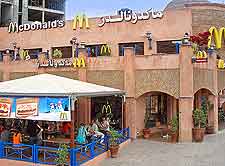 You can generally eat at all hours in the markets, which stay open late. During the month of Ramadan, market stalls and cafés remain open into the small hours, usually until around 03:00. At other times, standard restaurants close relatively early due to the Muslim tradition of sleeping early and rising early, although in touristy areas places eateries open late. 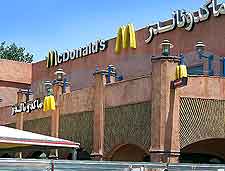 Moroccan food is a blend of Arabic and French tastes and is generally spicy. Succulent fish and meat appear in most dishes along with fresh fruits and vegetables. The meat stew known as 'tajine' is one good dish to try, while lamb roasted on a spit (mechoui) is also very tasty, as are kebabs. For a snack, give the pastry with pigeon meat (pastilla) a try.

Notable national drinks are refreshing mint tea made with fresh mint, green tea, and sugar, while strong coffee is had any time of day apart from at breakfast time.

Most Marrakech hotels also offer a variety of international foods at their restaurants, as well as the standard Moroccan cuisine, with French, Spanish and Italian dishes being the most popular. The most inexpensive dining options tend to have fixed menus. 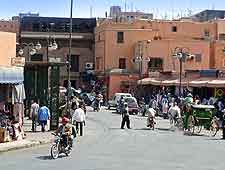 Moroccans love to eat and there are eateries of all shapes, sizes and types all over Marrakech city. All budgets and taste buds are catered for, with everything from scrumptious Moroccan pastry houses to five-star a la carte restaurants, right down to street vendor fare. You can get some of the best food in the city at the 'souks' (markets), where vendors are open seemingly all hours. Kebabs with spicy sauce are the name of the game here.

Djemma El Fna Square is a big tourist attraction, as well as being one of the best places in Marrakech for dining. Restaurants here are especially popular with locals, and the choice of snacks and full-blown meals is mind-boggling. The quality here is also surprisingly good for street dining, as it is monitored by the Moroccan government. Despite this, be wary when eating salads. 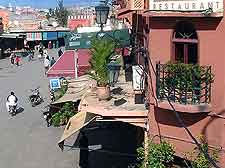 The small back streets in this area are also worth a look for their quiet ambiance, although prices are generally higher. Vegetarians should head for Tagine avec Legumes, while those looking for high quality dining should stick with the Medina and Ville Nouvelle. Many of the restaurants in this part of Marrakech cater mainly to tourists looking for Western foods, although an exception is Diaffa, on Rue Jbel El Akhdar, which is a well-established, all-Moroccan restaurant in a fine old building with excellent food.

Marrakech's top hotels also have some good dining, yet are the most expensive option. You won't need to make a reservation at standard restaurants, although Diaffa is worth calling ahead of time. What makes the top restaurants so much more expensive is the 19 percent VAT, plus the 10 to 15 percent service charge. You will be expected to tip if a sit-down eatery has no service charge, except for the hawker stalls of course.