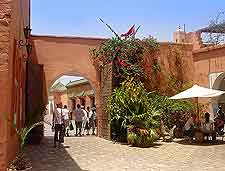 Marrakech has a fair collection of museums which display artefacts relating to the city's rich Moroccan past. Just about every museum within Marrakech is housed in an impressive building of some sort, either originating as a palace or a mansion that displays fine forms in their own right.

The Dar si Said Museum is a particular must-see that does rather stand out. If you have time for more of the city's cultural attractions, then do pay a visit to the Marrakech Museum, which is actually housed in the traditional stone-built Dar M'Nebhi Palace. 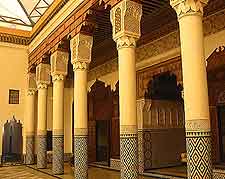 Address: Plaza Ben Youssef, Marrakech, Morocco, MA
Tel: +212 024 441 893
Situated in the stunning 19th century Dar M'Nebhi Palace, next to the Medersa Ben Youssef, the Museum of Marrakech is visited as much for its architecture as it is for its contents. The central atrium is massive and covered by a domed tent supported by pillars, and there are many exhibitions inside showing off paintings, ceramics, and photography. A bookstore is also onsite.
Open hours: daily - 09:00 to 19:00, seasonal variations apply
Admission: charge 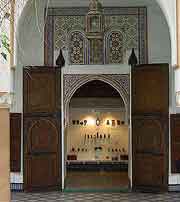 Address: Riad Ezzitoun El Jadid, Marrakech, Morocco, MA
Tel: +212 024 442 464
The Dar Si Said Museum contains all sorts of artefacts of Marrakech's illustrious past and is housed in what was once a royal palace. This grand former palace was built in the 19th century and today contains carpets, carvings, pottery, musical instruments, leather works, jewellery and more. The main exhibit is the first floor salon which has a carved cedar ceiling and a 1,000-year-old marble basin. Check out the ground floor for the Berber clothes and jewellery and the courtyard for carvings.
Open hours: Wednesday to Monday - 09:00 to 12:00 and 15:15 to 18:15
Admission: charge

Address: Rue de la Bahia, Marrakech, Morocco, MA
Tel: +212 024 389 192
Maison Tiskiwin is quite close to Dar si Said Museum and is one of the most fetching townhouse museums of anywhere. It can be found on Rue de la Bahia and used to belong to Bert Flint, a Dutch expatriate and prolific collector of Marrakech art. Jewellery, textiles, and baskets are the chief items on display here.
Open hours: daily - 09:00 to 19:00
Admission: charge