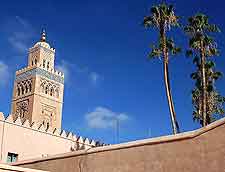 Palaces, mosques, other religious buildings and positively ancient ramparts are the main monuments and landmarks to check out in Marrakech. Impressive landmarks worth looking out for in Marrakech include both the Bahia Palace (Palais de la Bahia) and the El Badi Palace (Palais El Badi), as well as the Gate of the Gnaoua (Bab Agnaou).

The Koutoubia Mosque is very photogenic and the tallest structure in the city, playing an important part of the Marrakech skyline. Visit this pretty site after dark to see it illuminated, when its appearance is especially dramatic. 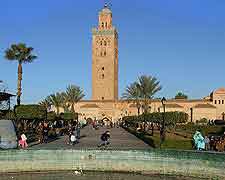 Address: Avenue Mohammed V, Marrakech, Morocco, MA
One of the most recognisable Marrakech landmarks, the Koutoubia Mosque features an imposing minaret that towers above the rest of the city. Hemmed in by well-tended gardens and beautifully lit at night, the mosque harks back to the 12th century, but is unfortunately off-limits to non-Muslims. You can still walk around the gardens, however. The Koutoubia Mosque remains the city's biggest mosque and its tower is almost 70 metres / 230 feet in height, being very hard to miss.
Open hours: daily
Admission: free 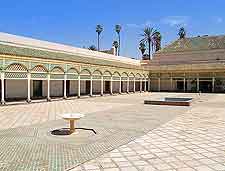 Address: Rue Riad Zitoun El Jedid, Riads Zitoun, Marrakech, Morocco, MA
Tel: +212 024 389 564
The stucco and stonework in the Bahia Palace is truly amazing. Mosaics cover the floors, while the wooded ceilings are just as intricately decorated. The stucco effect took years to achieve when it was produced here in the latter part of the 1800s. The entrance to Bahia Palace is near to the Place des Ferblantiers, and some 150 individual rooms await inside. However, only a limited number of these extravagant rooms are actually opened to the public.
Open hours: daily - 08:45 to 11:45, 14:45 to 17:45
Admission: charge 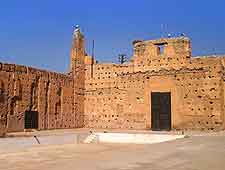 Address: Rue Riad Zitoun El Jedid, Kasbah, Marrakech, Morocco, MA
This elaborate 360-room, 16th-century palace featured ornately decorated rooms in its day, complete with gold, ivory, and marble. Unfortunately, thieves emptied the rooms of their valuables after Meknes became the capital city in the late 1600s. The ruins are, however, well worthy of exploration and the annual National Festival of Popular Arts is a big event here, attracting huge crowds each July.
Open hours: daily - 08:30 to 11:45, 14:30 to 17:45
Admission: free 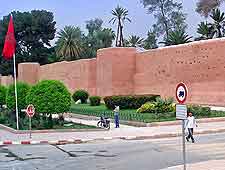 Address: Marrakech, Morocco, MA
Marrakech's pink ramparts have been here since the Middle Ages and are still a major landmark to look out for. They are well preserved and it is easy to imagine the Medina of palaces and mansions they protected back in the day. The 10-metre / 33-foot high ramparts used to keep out anyone who didn't reside in the city and encircle Marrakech for 16 km / 10 miles or so.
Open hours: daily
Admission: free 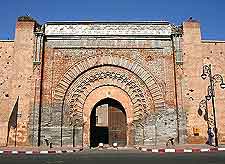 Bab Agnaou (Gate of the Gnaoua)

Address: Marrakech, Morocco, MA
With its elaborate trompe l'oeil effect over the gateway giving it more depth, the Bab Agnaou (Gate of the Gnaoua) is one of the 20 gates that once protected the city. This early stone monument is amongst the oldest within the city and was built in the 1100s. Its fine stonework changes hue throughout the day, depending upon the sun position and the heat.
Open hours: daily
Admission: free