Marrakech Events, Things to Do and Festivals 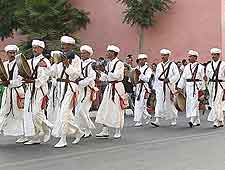 Marrakech boasts many fun festivals for tourists to get involved with, or at least see from the sidelines. Events go off throughout the year with important religious 'moussem' gatherings, major Muslim events like Ramadan, and even a film festival and an international marathon.

Dates vary year on year, with things to do in Marrakech often depending upon the Muslim and lunar calendars. There are, however, a handful of non Muslim festivals celebrating music, dance and the arts at fixed dates.