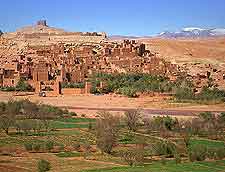 Many of the most-visited Moroccan attractions outside of the city lie to the south of Marrakech, with Ourika Valley being one of the more scenic areas in the High Atlas area and a popular day trip, being just 45 minutes away by car. Close by is the village of Asni, and the towns of Amizmiz, Ouarzazate and Oukaimeden, the latter of which is a leading tourist destination in the Atlas mountains, and one of Africa's most noteworthy mountain resorts.

Also near to Marrakech are the attractions of Ait Benhaddou, which is actually one of the most colourful and enticing of all the kasbahs within this part of Morocco and perfect for an excursion. Ait Benhaddou remains exceptionally well-preserved, thanks to being used as a film set for a number of successfully Hollywood movies, such as Lawrence of Arabia. 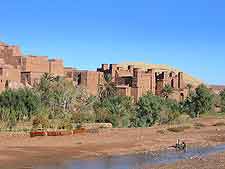 Believed to have been founded as long ago as the 11th century, Ait Benhaddou lies to the south of Marrakech and makes for an interesting day trip, with a number of locals now opening up their houses to the public. The Tamdaght kasbah is also close by, as is the hammada desert.

The rural village of Asni stands at the very junction of the scenic Marrakech to Taroudannt road and to the south of the city itself. Asni is located within the Atlas mountains and is particularly close to the Jebel Toubkal, which is the tallest mountain within the whole of North America and dominates the area, standing at more than 4,150 metres / 13,615 feet. There is little to see within Asni in the way of tourist attractions as such, although the surrounding hiking trails may be of interest, or the enormous Saturday souq (market), which is amongst the biggest in this area of the Atlas mountains and always draws large crowds. 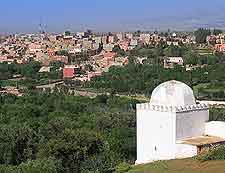 The small town of Amizmiz is situated roughly 55 km / 34 miles to the south of Marrakech and is to be found at the very base of the High Atlas mountain range. Many day trippers arrive in Amizmiz each day, with the towns Tuesday souq being an especially popular attraction and offer the chance to purchase an array of local Moroccan gifts and produce. Alternatively, enjoy a trek into the hills and visit the very rustic Berber Villages, where life is remains quite unchanged by the modern world. 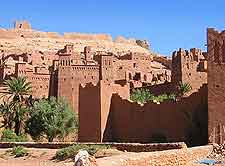 Ouarzazate resides where the valleys of Atlas, Dads and Draa all come together and is sited directly to the south of Marrakech. The town of Ouarzazate is fairly modern and was established as an administrative centre by the French as recently as the 1920s. A number of attractions now present themselves within Ouarzazate and include activity companies offering everything from quad-bike safaris to camel trekking through the desert countryside and alongside the valleys. Look out for the Taourirt Kasbah, a magnificent palace which has played host to many members of the Glaoui dynasty.

For something quite different an unexpected, take an excursion to Oukaimeden, where is one of only a handful of destinations throughout Morocco where skiing is possible during the winter months of January and February. Oukaimeden is also home to Africa's highest ski lift and transports its passengers to heights of more than 3,250 metres / 10,660 feet, providing spectacular views along the way. Apart from its choice of winter sports, Oukaimeden also offers an unbeatable selection of hiking trails and outdoor activities, and a good chance to experience some rather different Moroccan mountain flora and fauna. 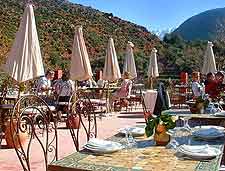 The charming village of Setti Fatma stands within the Ourika Valley area and 24 km / 15 miles to the south of Oukaimeden, therefore being within easy reach of Marrakech. Setti Fatma is very much central to tourism around the valley and actually started life an two quite individual villages, those of Ilkhrie and Asagour. Most tourists come here to relax by the riverside, stroll to the hidden waterfalls, or enjoy a hike further afield. Setti Fatma plays host to a religious 'moussem' event each August, which lasts four days and is not to be missed. 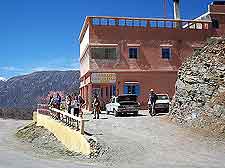 Directly south of Marrakech and in the direction of Taroudannt is an especially scenic drive, which ranks as one of the most special in Morocco. The road weaves its way through the neighbouring High Atlas and over the Tizi n'Test Pass, reaching at height of more than 2,000 metres / 6,560 feet. A number of vantage points present themselves along the way, although do be warned that the bends can be very sharp at times. The town of Ouirgane is certainly worth stopping at and features some excellent accommodation options. 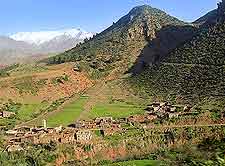 Somewhat higher than the Tizi n'Test, the Tizi n'Tichka Pass is every bit as spectacular and even higher. The Tizi n'Tichka is situated to the south-east of Marrakech and is considerably easier to navigate, linked the city with the pre-Sahara desert oases. Many attractions line this mountain route, such as the city of Ait Ourir, and the villages of Tigmi Atlas and Taddert. Telouet is a notable stop and this town is famed for its historical kasbah, which although is starting to crumble, still manages to boast an elaborate central hall and ornate reception rooms.