Getting Around, Ethiopia Travel, Transport and Car Rental 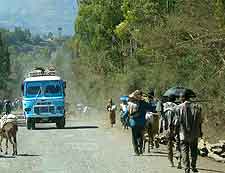 As is the case for many African countries, it is often easier to catch an internal flight in Ethiopia, rather than risk hours of poorly maintained or non-existent roads. Transport connections by road are known to be fairly slow and this is not usually a particularly comfortable way to travel long distances across Ethiopia and beyond.

Having said that, a bumpy bus trip to the next destination on your itinerary can really make you feel like you're exploring Ethiopia first hand, rather than just seeing it through the eyes of a typical tourist. Limited rail travel is another possible transport option, along with car rental with your very own driver. 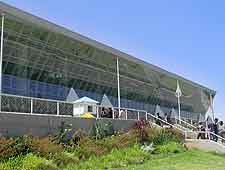 Address: Bole Road, Addis Ababa, Ethiopia, ET, Africa
Tel: +251 011 618 0454
Most flights from outside Ethiopia come into Bole International Airport, situated some 8 km / 5 miles outside Addis Ababa. Direct flights operate to and from London and Washington DC. From there, it is relatively simple to catch domestic flights to a large number of Ethiopian destinations, including Axum, Bahr Dar, Gondar and Lalibela. Some international services also fly to the Aba Tenna Dejazmach Yilma International Airport in Dire Dawa. Of note, entry visas can be arranged here upon arrival. The main airports in Ethiopia are listed below, many of which simply feature short, unpaved runways and limited services: 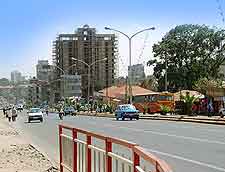 The Trans-East African Highway links Addis Ababa with Nairobi in Kenya. It is also quite feasible to travel by car into Ethiopia from Djibouti and Sudan.

Road conditions in Ethiopia can be variable. However, car travel does give visitors much greater flexibility than travelling by bus or rail transport. Four-wheel cars and drivers can be hired. 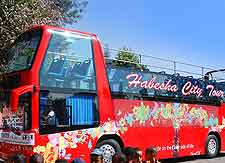 Most of Ethiopia's larger towns and cities are accessible by bus transport. They tend to operate strictly on a first-come-first-served basis and during the day time only. If you are travelling any sort of distance, then you can expect your bus to depart quite early in the morning. To make sure that you pay a fair price, it is best to book your ticket in advance, if possible. 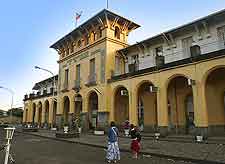 Train travel in Ethiopia is somewhat restricted by the fact that there is only one railway line in operation. This connects Addis Ababa with Dire Dawa, the country's second-largest city. This train service can take more than 16 hours, depending on track conditions. It is also not noted for its reliability. From Dire Dawa, it is possible to travel on by train through to Djibouti. 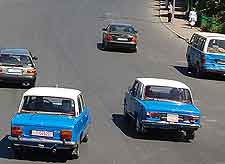 For getting around within Ethiopia's towns and cities, most people generally travel by taxis or minibus-taxis. Taxi journeys are generally not metered, so fares should be agreed in advance if you don't want an unpleasant surprise when you reach your destination.

Minibuses are also a useful way of getting to the next town, if it's only a short distance away, and in particular for trips during the evening when scheduled buses have stopped. Unlike ordinary taxis, they tend to stay to set routes with fixed fares.