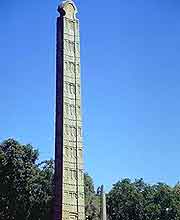 Located in East Africa, Ethiopia is the one of the most-populated countries on the entire continent, with a population of more than 80 million people.

Ethiopia has a long history of independence and remains one of the few African countries never to have been properly colonised. However, its history dates back to the emergence of the earliest species of Homo Sapiens around 200,000 years ago.

The recorded history of Ethiopia dates back to the 8th century BC, when an ancient kingdom called D'mt was formed in the area now making up northern Ethiopia and Eritrea. This Arab-influenced empire fell in the 4th century BC and after a stage of transition, the Aksumite Empire took control and reunited the independent kingdoms.


Travellers interested in learning more about the pre-Aksumite civilisation can visit the town of Yeha, near Aksum. Dating back to around 700 BC, the Temple of Yeha is the oldest ruin in the entire country and serves as an excellent example of Sabaean architecture from that time.

It wasn't until the 1500s, during the Solomonic Dynasty, that Ethiopia made serious contact with Europeans. The Emperor of Abyssinia approached both British and Spanish monarchs at this time, but it was with the Portuguese that the first continuous relationship developed.

The Portuguese were appreciated at first, playing a key role in the Ethiopian-Adal War by providing soldiers and munitions to local forces. However, Emperor Susenyos' conversion to Catholicism in the 1620s led to several years of bloody revolt, only ending when the son of Susenyos, the powerful Emperor Fasilides, ordered the expulsion of both Europeans and Jesuit missionaries. The state religion once again reverted to Ethiopian Orthodox Christianity.

Many of the country's modern-day historical attractions were built during the Fasilides era. These include the Fasil Ghebbi fortifications at Gondar, a series of castles and palaces which include the Fasilides Castle, built in the late 1640s. In the northerly city of Axum (Aksum), visitors can also see the 1665 Old Cathedral of St. Mary of Zion, reputed to house the stolen Ark of the Covenant. 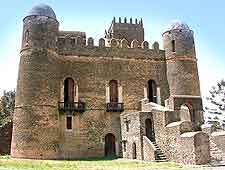 The beginnings of modern Ethiopia began when Emperor Tewodros II came to the throne in 1855. Prior to this, Ethiopia had been isolated for around a century during the Zemene Mesafint, a time when warlords had more ruling powers than emperors. Tewodros II chose to commit suicide just over a decade later, after a battle against the British.

During the second half of the 19th century, Ethiopian troops fought off invaders from both Turkey and Egypt. In the 1880s, the country became aligned with Turkey, Egypt and Britain, as they combined forces to fight in the Mahdist War against the Sudanese.

The 19th century ended under the rule of Emperor Menelik II, a visionary who unified the country and oversaw great improvements to its infrastructure, as well as the building of the new capital, Addis Ababa. He also ceded a small part of northern Ethiopia to the Italians in exchange for their support. The Italians had colonial ambitions, but were driven out in the 1896 Battle of Adwa. 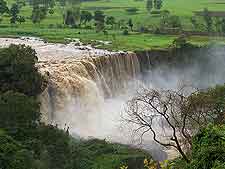 The 20th-century history of Ethiopia is dominated by one man, Emperor Haile Selassie I. He became emperor in 1930, but it wasn't until 1935 that he came to worldwide prominence, following a key address at the League of Nations. With the help of British forces, he oversaw Ethiopian liberation following Italian occupation during WWII, while he later outlawed slavery. Unsurprisingly, Haile Selassie is remembered as being something of a national hero.

A number of issues facing the Ethiopian populace in the early 1970s, such as food shortages and border skirmishes, meant that his reign was slowly coming to an end. Selassie was eventually displaced by a Soviet-backed communist group in 1974, controlled by influential politician Mengistu Haile Mariam. It was after this 'king of kings' that the Rastafarian movement was inspired in the earlier part of the century, taking its name from Ras Tafari Makonnen, an alternative name for Selassie. Later, Mengistu was to fall from grace, losing touch with his people and being disgraced for his human rights disgressions.

The Mengistu era began a long and dark episode in the history of Ethiopia, one from which it has arguably never recovered. The 1970s and 1980s were marred by war, famine and state-sponsored genocide. Mengistu was found guilty of genocide in 2006 and remains exiled in Zimbabwe, where he has resided since fleeing Ethiopia during the 1991 worldwide collapse of communism.

Following the revolution, Ethiopia established a 1994 constitution, although still remains far from stable, with the Eritrea-Ethiopian conflict at the end of the 1990s serving as a sad reminder of the past. To this day, drought problems continue to affect the long-suffering population, although Addis Ababa is surprisingly green and modern.