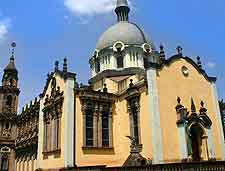 Whilst there are a diverse assortment of tourist attractions spread all over Ethiopia, it is fair to say that some really do stand out from the crowd. In Addis Ababa, St. George Cathedral is a particularly popular attraction and is known for its beautiful architecture.

In north Ethiopia, the city of Axum is famous for its magnificent Old Cathedral of St. Mary of Zion and Treasury, which is thought to be country's oldest church. Further tourist attractions await in the city of Gondar, which is also located on the northerly side of Ethiopia and is home to the much-admired Royal Enclosure (Fasil Ghebbi). 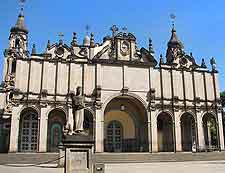 Address: Niger Street, Addis Ababa, Ethiopia, ET, Africa
Holy Trinity Cathedral is the site of the tombs of Emperor Haile Selassie and his wife Empress Menen - hence, it is more widely known by locals as Haile Selassie Church. The cathedral was rebuilt after the Italian Occupation and dedicated to those who lost their life during that period. All Ethiopia's archbishops and bishops are consecrated at Holy Trinity Cathedral.
Open hours: Monday to Friday - 07:00 to 18:00; Saturday and Sunday - 09:00 to 18:00
Admission: charge 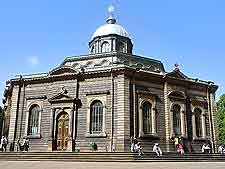 Address: Fitawrari Gebeyehu Street, Addis Ababa, Ethiopia, ET, Africa
Situated beyond the northern end of Addis Ababa's Churchill Avenue, this attraction was built at the end of the 19th century in an unusual octagonal design. In 1930, the St. George Cathedral became the site for Emperor Haile Selassie's coronation. Visitors can today admire the coronation throne, which is displayed inside. Outside, is an intricately carved statue which represents a martyr who was assassinated in 1937, during the war with Italy.
Open hours: daily, 08:00 to 09:00 and 12:00 to 14:00
Admission: free 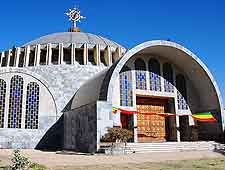 Old Cathedral of St. Mary of Zion and Treasury

Address: Axum, Ethiopia, ET, Africa
The Old Cathedral of St. Mary of Zion and Treasury is quite a sight to behold, and what we see today is mostly 17th century in date. However, earlier buildings have existed on this site since its consecration in the 4th century. The Ark of the Covenant is reputed to have been brought to the church after its disappearance from Jerusalem. Indeed, the church plays such an important religious role in Ethiopia that all its emperors have come to Axum to pay homage following their coronation.

A new cathedral was commissioned by Emperor Haile Selassie in the 1950s and completed in 1964. A small chapel or treasury was also built in the space between the two cathedrals at that time. Thought to house Axum's Ark, the treasury is guarded by one appointed lifetime guardian. The Arc itself is kept firmly hidden away from public view.
Open hours: daily - 08:00 to 12:00 and 14:00 to 18:00
Admission: charge 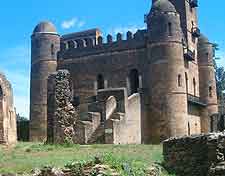 Address: Gondar, Ethiopia, ET, Africa
Listed as a Unesco World Heritage Site since 1979, the Royal Enclosure at Gondar is a vast walled complex comprising several royal castles and palaces. Most date from the mid-17th century, when Gondar became the capital of Ethiopia. The most striking of all the buildings is the recently restored Fasilades Palace, with its domed towers and huge wooden doors. Other smaller castles are dotted around the enclosure and although these attractions have been left mostly unrestored, they nevertheless offer a picture of life in Gondar during its royal heyday.
Open hours: daily - 08:30 to 12:30 and 13:30 to 17:30
Admission: charge

Address: Addis Alem, Ethiopia, ET, Africa
Ethiopia's Emperor Menelik was crowned here in 1882. Indeed, the church is one of the few remains of the town's aspirations to become the important capital city. The Entoto Maryam Church is situated high up in the Entoto Mountains, offering great views of Addis Ababa. Church services are still held here on a regular basis.
Open hours: Sunday, during church services
Admission: free