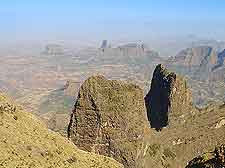 Following some years of unrest, the national parks and reserves in Ethiopia are gradually becoming more accessible to visitors. From white-water rivers to deserts and Alpine highlands, they cover a rich variety of landscapes.

Ethiopia's parks also give visitors an opportunity to observe at first hand a wealth of flora and fauna in their natural habitat. The Simien Mountains are among the highest in Africa at 4,620 m / 15,157 feet and make for excellent trekking country. 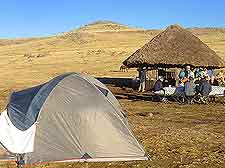 Address: Debareq, Ethiopia, ET, Africa
Whilst temperatures might be pleasantly warm at the foot of the Simien Mountains, at their peak ice can appear and nighttime temperatures plummet. This National Park is well set up to receive visitors in terms of equipment and guides. It is also home to some spectacular views, as well as a huge variety of fauna, flora and birdlife. In particular, a type of mountain goat known as the Walia Ibex flourishes in the park, along with Gelada Baboon and the Simien Fox.
Open hours: daily
Admission: charge 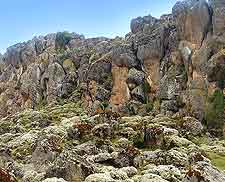 Address: Dinsho, Ethiopia, ET, Africa
Bale Mountains National Park features everything from vast stretches of moorland, to mountainous areas that rise to a height of over 4,000 m / 13,123 feet. The park offers limited facilities for visitors. However, on the plus side, it is home to an untouched natural world that includes numerous species of birds and animals, such as the Gelada Baboon, the giant mole rat and the mountain nyala (a type of antelope). Bale Mountains is popular with walkers, and as there are few roads in the park, walking is both a leisure activity and a necessity.
Open hours: daily
Admission: charge 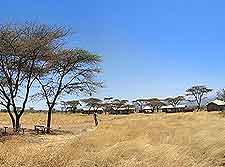 Established as Ethiopia's very first national park back in the 1960s, Awash is located at the heart of the Great Rift Valley. Over 80 different animal species and 450-odd bird species can be found within the boundaries, which mostly feature a woodland and grassland environment above 1,000 m / 3,280 feet. Today, Awash National Park has become a popular tourist attraction, offering good facilities for visitors, including a camp site, lodge, restaurant and museum.
Open hours: daily
Admission: charge 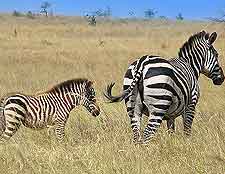 Omo National Park is the largest in Ethiopia. Over 300 species of birds are thought to live there, along with such animal species as buffalo, elephants, giraffes, cheetah and zebra, offering a very 'real' safari experience. The Omo River runs through the park and over the years has become a popular destination for white water rafters. The park is relatively hard to access, although worth the effort.
Open hours: daily
Admission: charge