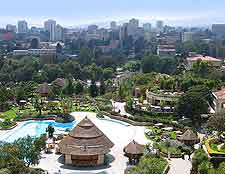 Eating in Ethiopia can be a lively affair, with traditional restaurants often laying on musical entertainment while you eat. Dining out can be an international experience too, particularly in Ethiopia's larger cities, where cuisine from China, Europe, India and the Middle East is served in many restaurants and eateries.

Some restaurants in Ethiopia close on Sundays or during certain days of the week, so its worth checking in advance if you're planning to eat out. Dinner in the evening is usually served from 19:00 to around 23:30, while most cafés are open during the day, seven days a week 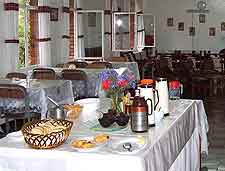 No Ethiopian table would be complete without a large tray-sized 'injera' at its centre. Traditionally made using 'teff' grain, this sort of spongy pancake-cum-flatbread is topped with spicy meat or vegetable sauces.

A traditional stew known as a 'wat' appears in homes and restaurants all over Ethiopia. Most are made using chicken, beef, lamb or goat. However, vegetarian and fish versions are also served and these often contain peanuts and pulses such as field peas. Wats are heavily seasoned using red pepper 'ber-beri', a mixture of several spices. A variation on the wat theme is 'alecha', with the difference between the two being that the latter does not use ber-beri seasoning.

Fritters made from ground lentils or chickpeas also appear on menus at dining establishments around Ethiopia, along with legume-based salads. Other traditional foods include 'iab' - a sort of curd cheese flavoured with herbs, and 'kifto' - made from ground raw beef and served either raw or cooked through. Ethiopian meals are usually served with a glass of 'tej', made from honey and hops. 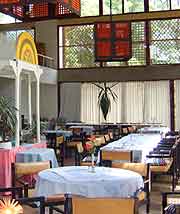 Addis Ababa is home to a large number of restaurants serving traditional and international dishes, so whether you're in the mood for an Ethiopian stew, an Italian pizza or Indian curry, you're sure to find something to suit. Many of the city's restaurants can be found in the south-eastern district, around the Bole Road. Others are located in the Piazza district.

If you are staying in one of the larger city hotels, then it's likely that you won't have far to go to dine out. For example, at the Hilton Addis Ababa, diners can enjoy the more elegant and formal surroundings of the Jacaranda Restaurant, opt for its themed Italian-style pizzeria, or settle for bar snacks in the hotel's lounge. Likewise, the Sheridan Addis offers an impressive array of restaurants, bars and lounges.

Visitors who prefer to explore the unfamiliar won't be disappointed by the Ethiopian dining experience. Live music and dining is often on offer alongside local dishes, making for a lively atmosphere. Diners should take care to remember that meals should be eaten using your right hand only. Cutlery is not usually provided in restaurants serving Ethiopian food, as eating with fingers is the norm. 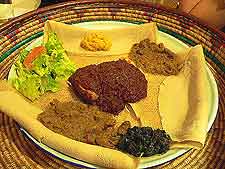 Cakes, pastries and ice creams are available throughout the day at Ethiopia's cafes. In Addis Ababa, there are numerous places to quickly refuel between sightseeing. More filling snack food is also usually served, making these good places for an informal lunch. For a special afternoon treat, head down to the Sheraton for a good, old fashioned afternoon tea, accompanied by the sound of the hotel's pianist.

Outside of Addis Ababa, the larger towns and cities in Ethiopia offer a fairly decent choice of restaurants and cafes, serving a variety of tasty western and Ethiopian dishes. Several, including the Seven Olives Hotel in Lalibela, have acquired a reputation for offering good value traditional fare.