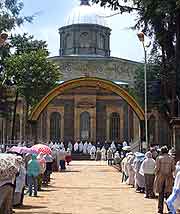 The country of Ethiopia covers a simply vast area of Africa and therefore tourists intending to holiday here really do need to plan their itinerary carefully, deciding in advance which towns and cities are likely to be of the most interest. As the capital of Ethiopia, a trip to Addis Ababa is an absolute must and certainly won't disappoint.

The city of Dire Dawa is another very appealing Ethiopian tourist destination, as are the vibrant cities both Axum and Gondar, which come with impressive historical remains of the past.

When it comes to charming towns in Ethiopia, consider an excursion to Addis Alem, Harar or Lalibela. 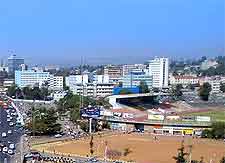 The Ethiopian capital of Addis Ababa is a pleasant city that can offer its visitors a mix of green spaces in which to relax, as well as a plenty of attractions and monuments, including museums and historic churches.

Visitors can also enjoy great panoramic views of the city from the nearby Entoto Mountains. More information about Addis Ababa. 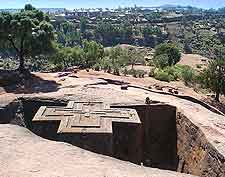 Back in the 12th century, Lalibela was the capital city of Ethiopia. Today, it is a modestly sized town, still relatively isolated, in the Ethiopian Highlands. In the 1980s, Lalibela lay at the centre of the Ethiopian Famine.

The vast majority of tourists who visit Lalibela today come to see its rock-hewn churches, often described as the 'Eighth Wonder of the World' . 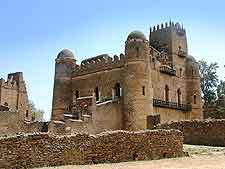 Located some 500 km / 310 miles north of Addis Ababa, the city of Gondar is another former capital of Ethiopia. Since its foundation in 1635, Gondar has seen more than its fair share of turmoil. It was captured by Italy during the Second World War and then became embroiled during Ethiopia's Civil War during the 1970s. Nowadays, visitors will find a more peaceful city, with many impressive palaces and other grand buildings. These include the ruins of the Royal Enclosure, an ancient castle complex that lies at the heart of Gondar. 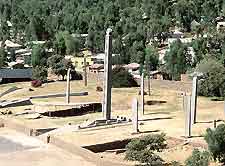 Once home to grand palaces and temples, the historic city of Axum is surrounded by myths and legends that relate to its role as the original sanctuary of the ancient Ark of the Covenant. Today, the place is more of a small town than a city, and only the foundations and ruins of these once fabulous buildings survive. Nevertheless, Axum retains its place on tourist itineraries. Its most popular landmark, the 16th-century Cathedral of St. Mary the Zion, is particularly popular with visitors. 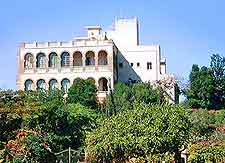 Dire Dawa lies on the railway line that runs from Addis Ababa to the port of Djibouti. Established in 1902, it has developed into the country's second most populous city. Tourist attractions include a colourful market, large mosque, numerous cave paintings that date back to prehistoric days and, of course, its busy train station.

Located in central Ethiopia, the town of Addis Alem was once intended to be Ethiopia's new capital city. In 1903, however, it was decided to keep Addis Ababa as the capital and Addis Alem remained what we see today, a relatively small town. Visitors can stop off at the town's museum or Church of St. Maryam, or simply soak up the atmosphere of the place. 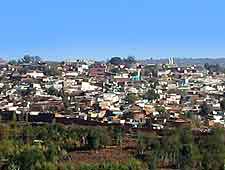 Few can resist the lure of Harar with its multitude of mosques, atmospheric markets, ancient walled town, and stunning location atop a steep cliff. Harar is perhaps best known as the heart of Ethiopia's Muslim community. Easily accessible by road from Dire Dawa, this historic city was added to UNESCO's lists of culturally significant sites in 1989. Of particular note is the Old City, together with Harar's Military Academy.