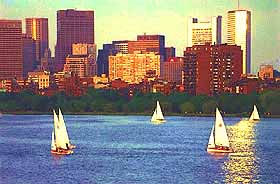 People in Boston are generally fairly understated and quiet - except when it comes to sport. Loud and loyal fans of their sports teams and active participants in a wide range of outdoor activities, they love sports.

New England has some of the nation's most admired professional sports teams and also a long tradition of college sports excellence. The huge areas of forests, rivers, lakes and mountains that form the New England landscape also boast a variety of recreational outdoor activities.

Held every year since 1897, this is the world's oldest annual marathon and very much a part of local city life. In April on Patriot's Day, both spectators and participants gather for this impressive event. With an exciting and fun atmosphere, this is a very enjoyable race.

Tel: +1 (617) 624 1000
The Boston Celtics are America's most famous professional basketball team and are tied to the heart and soul of the city. They are named after the Bay City's substantial Irish population and have won 16 National Basketball Association championships, which is more than any other professional team. The regular basketball season runs from October until April, with many championship playoffs continuing until June. The Celtics regularly play at the Fleet Center. 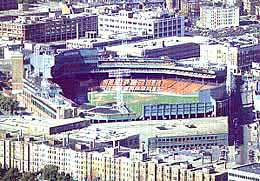 Tel: +1 (617) 482 1700
Few teams have a more illustrious history than the well-known Boston Red Sox, New England's only major-league baseball team. In 1903 they won the first World Series ever played and have had many of baseball's greatest stars play for them, including Ted Williams, Wade Boggs and Babe Ruth. In the city, the Red Sox play at the wonderful Fenway Park, which is a charming old-fashioned grass stadium in the heart of Kenmore Square. Beginning in early April, the baseball season ends the first weekend in October, with teams from both the American League and National League usually playing around 80 games a year.

New England is also home to a number of small town leagues throughout the region and these provide ideal training grounds for the baseball stars of the future. Check local league listings for minor league games in cities from Burlington to Pawtucket.

Tel: +1 (508) 543 1776
With pre-season action beginning in early August, 28 National Football League teams take to the field - called the gridiron. The regular season runs from early September to late December with playoffs in the Super Bowl taking the season into late January.

After years of staying at the bottom of the ranks, the New England Patriots are now struggling towards success in professional football. The team actually made it to the Super Bowl in 1986, but ended up losing to the Chicago Bears, although they did play a fine game. The Patriots play at Sullivan Stadium in Foxboro, with is only 45 minutes south of Boston, although this is not the only game in town. Every autumn loyal alumni from New England's many colleges head for university stadiums throughout the region. It is here that tradition plays as much a role as the game itself, with old friendships and rivalries being rekindled. The annual Harvard / Yale game is probably the most famous of these games, known simply as The Game. The competition, which is over 100 years old, is the nation's longest standing inter-college sporting event, with athletes from two of America's Ivy League universities playing against each other in a battle of prestige, honor and of course, football.

Ice hockey is simply known as hockey in the US and from November to April, the National Hockey League attracts many thousands to arenas to enjoy ice hockey being played at its best. The sport migrated south from Canada over 100 years ago and now fits in very well with New England's cold winters. It has become one of the most popular games in the area and two professional teams, together with many other college teams, play the main matches worth watching. The Boston Bruins, a founding team of the National Hockey League, play in the Fleet Center arena and the Hartford Wolfpack play at the Hartford Civic Center in nearby Connecticut.

What could be more pleasant than relaxing on Cape Cod beach on a hot, sunny day and then taking a dip in Vermont's Lake Chaplain and plunging into the cold waters of Maine Coast?! The majority of New England's top beaches are open to the public, but it is advisable to get there early before the crowds. It is worth noting that locals also refer to areas of imported sand by freshwater lakes as 'beaches'.

New England's coastline provides a wealth of opportunity for enjoying the open waters, whether you arrive by yacht or just enjoy sailing. Most harbors have a marina or dock to pull into for the night and charters are usually readily available. For sailing in fresh water, take the advantage of the region's many areas of inland water.

Many surfers ride the waves off the coasts of Maine, Nantucket and Martha's Vineyard. Windsurfers can be found almost anywhere there is water and in New England there are many lakes and areas of water that are most suitable for windsurfing.

Whether in freshwater streams, lakes or deep sea, New England enjoys excellent fishing. At the countless harbors, someone will usually be offering fishing trips. Consult the local tourist bureau for further information.

New England is packed with championship golf courses and excellent tennis facilities. There are Professional Golf Association tournaments at Pleasant Valley near Worcester, Massachusetts and at a designated course in Hartford, Conneticut. The country club near Boston recently hosted the US Open Golf championships. The 'Yellow Pages' list almost all the public and private golf courses.

For racket enthusiasts, the region has a rich history of tennis excellence, dating back to the creation of the US Pro Championships. This annual event, held at Longwood Cricket Club near Boston, is one of the longest-standing profession tennis tournaments.