Getting Around, Boston Travel, Transport and Car Rental 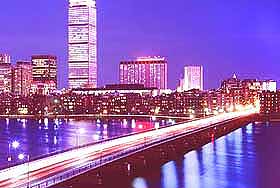 The city is compact and is easily covered on foot or by public transport. The MBTA underground subway trains - 'T' for short - are the easiest way to travel into and around the city. There is also a water shuttle that crosses the harbor from Rowe's Wharf to the airport.

Driving in Boston is not easy and if you are driving from Logan to downtown, the most direct route is by way of the Sumner Tunnel, which has a small toll charge. As there are many one-way streets and roads with identical names, a map is essential, particularly in downtown where the roads have constant detours as a result of the 'Big Dig' - a huge highway reconstruction.


Boston drivers have a reputation for driving badly so you should be extra alert for drivers using emergency breakdown lanes, passing on the right or turning in from wrong lanes. Parking on the street is possible, but it is better to park in garages or specific parking lots, as you will be more likely to avoid tickets and accidents. Major public lots are located at Government Center and Quincy Market, beneath Boston Common (entrance on Charles Street), beneath Post Office Square, at the Prudential Center, at Copley Place, and off Clarendon Street near the John Hancock Tower. There are many smaller lots and garages are scattered throughout downtown, especially in the Theater District and off Atlantic Avenue in the North End.

The speed limit on major highways in Massachusetts is 55 mph to 65 mph (88 to 104 kph). Within the city of Boston and surrounding areas, speed limits on local streets are 20 mph to 30 mph (32 to 48 kph). In the city, a right-turn at a red light is permitted after stopping, provided there is no oncoming traffic and a 'No Turn on Red' sign is not present. When in doubt, it is best to wait for the green light to appear.


MBTA - Traveling on the T

The Massachusetts Bay Transportation Authority subway, or 'T' as it is better known, was the first Public Transit System in the country and is now the oldest and one of the best subways in America. It serves most areas of the city and Cambridge, with several lines even running to outlying suburbs. Taking the 'T' is like taking a ride through history and for over 100 years it has been providing safe, efficient and reliable transportation to the area.

The MBTA is committed to safety in all aspects of its operation and apart from being incredibly convenient, it is also a very cheap way to travel.

Buses criss-cross the metropolitan area and travel farther into suburbs than subway and trolley lines. At the front of the bus, the destination sign above the windshield shows the destination and route number. It is important to make sure that you are boarding the correct bus, particularly at some stops where the buses stop to collect passengers, no matter which direction they are going. If in any doubt, check with the operator that you are on the correct bus and heading in the right direction.

Most buses collect fares as you board and accept passes, cash or tokens. Most local routes are less than one dollar if using cash, coins are preferable. If you need to ride on more than one route, ask for a transfer when paying your fare as you may be able to travel on the other route for free.

Bikes are only allowed on the Crosstown (CT) bus routes and these are equipped with bike racks that may be used at all times.

Trackless trolleys connect from the terminal points of the subway lines to destinations further out into the suburbs, with some routes running through the city. They are virtually silent, being powered electronically and departure times are less frequent than on the 'T'. The trolleys also serve Allston-Brighton, Belmont and Watertown and are very reasonably priced.

Boston South and Boston Back Bay stations are connected to Providence, New Haven and New York City by Amtrak rail services. Commuter rail routes run to the suburbs as far north as Haverhill and Rockport and as far south as Stoughton and South Attleboro. Commuter tail schedules are concentrated in the early morning and late afternoon and you can buy your ticket from the conductor, unless you board at manned stations. Many of the rail stations have parking lots where all-day parking is fairly cheap and these can get busy during the week.

Taxis are plentiful and very convenient, but can prove expensive. They can be easily hailed on the street and are available around the clock. Taxis generally line up in Harvard Square, around South Station, near Faneuil Hall Marketplace, and in the Theater District. A rooftop sign that is illuminated indicates an available cab and licensed taxis have meters and provide receipts.

The shuttle boat departs throughout the day from Rowe's Wharf to Logan Airport and also from Long Wharf to Hingham and provides a very quick way to travel in and out of the city. During peak hours the boats depart every 15 minutes / off-peak and at weekends every 30 minutes. The trip can be an enjoyable way to travel and is certainly preferable to sitting in traffic in the harbor tunnel or on the Expressway. Fares increase with the distance traveled.