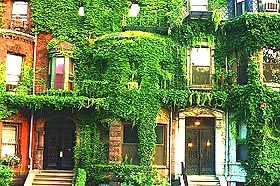 Although their histories have long been intertwined, Cambridge is a separate city from Boston. Just across the Charles River, Cambridge is full of green lawns, flowering trees, red-brick squares and has an invigorating modern atmosphere - young, bustling and trendy. Newtowne, as it was first called, was established in 1630 and quickly became the first capital of the Massachusetts Bay Colony.

In 1636 a college was founded - the first in America, later to become Havard - for the purpose of training young men for the ministry. That same year the town was renamed Cambridge, after the town in England where many of the Puritans had completed their studies. In 1639 the first printing press in the New World was established in Cambridge and it soon began producing the very first American publications.


Today, Cambridge exudes an academic atmosphere - which is not surprising since half of its 100,000 population is involved in education and the universities. Harvard University and the Massachusetts Institute of Technology (MIT) are located here, two world-renowned institutions. The heart of Cambridge is Havard Square (actually a triangle) and is full or more bookstores than you will find in many states, also containing many unique shops and national chains. In the center of the square is the landmark 'Out of Town News', with newspapers and magazines from every corner of the globe. Most of the major sites are within easy walking distance of the square. The surrounding blocks are crammed with all the bookstores, cafés, restaurants and shops that you would expect to find in a town that caters for 30,000 university students. Among the school's several museums is the Museum of Natural History, where over 800 lifelike hand-blown glass flowers and plants are on display.

An enormous shopping complex in situated in the center and includes many well-known department stores, smaller shops, cafés and countless food outlets. You could probably spend all day shopping here and being under cover, it is an ideal way to spend a rainy day. As well as Harvard Square, there is also Inman Square (brimming with shopping and dining), Kendall Square (home to MIT), and Porter Square (with antique shops, boutiques, sidewalk cafés and a serious concentration of Japanese enterprises). These are all treasure-troves of shops, museums and historic sites.

The wealthy Loyalist Tories of the 18th century built grand houses along the western end of Brattle Street, giving it the name Tory Row. Fine examples of these houses can still be found, in particular numbers 159 and 175. The oldest church in Cambridge, Christ Church, was built in 1760 and this simple gray and white building sits on the edge of Cambridge Common. A brass plaque marks the pew where George Washington and his wife worshipped on New Year's Eve in 1755. 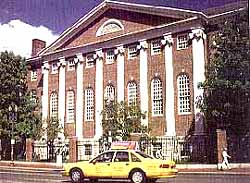 Founded in 1636, Harvard is the oldest university in the United States and among its graduates are six US Presidents - John Adams, John Quincy Adams, Theodore and Franklin D. Roosevelt, Rutherford B. Hayes, and John F. Kennedy. The historic Harvard Square contains many noteworthy buildings and monuments, including the 1726 Wadsworth House (headquarters for General George Washington in 1775), Daniel Chester French's 1884 statue of John Harvard and Widener Library, housing the world's largest university book collection with more than 13 million volumes.