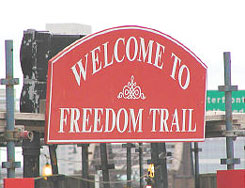 Freedom was never considered a gift. Harriet Tubman, step by step, forged the truth that freedom had to be taken. In 1951 local journalist William Schofield suggested linking historic sites in the city of Boston so that visitors and residents could find them more easily and in 1958, the Freedom Trail was created.

This is the perfect introduction to Colonial and Revolutionary Boston. The 3 mile / 4.8 km walk may take as little as two hours, but many will take longer to enjoy the attractions en-route. A red line has been painted throughout the route, connecting up the historic sites and making it easy to follow the trail. There are 16 sites included on this walk and in the last 30 years over USD 50 million has been spent fully restoring these sites to their former glory. The Freedom trail starts at Boston Common and travels through Beacon Hill, downtown, the North End and Charleston.


Walking is easy and pleasant, but the sites should be entered to be fully appreciated. Public transport is also available at most points along the trail. Handicapped accessible maps and guides are available. To reach the beginning of the Trail and Boston Common Visitor Center, take the Red or Green Line to Park Street Station. Exit the station and turn 180 degrees - the Center will be almost in front of you. Both the Green Line at Government Center and the Blue line at the Aquarium station provide easy access to Faneuil Hall / Quincy Market. From Government Center, walk down the big staircase and into Faneuil Hall. From the Aquarium, walk under the expressway and into Faneuil Hall. 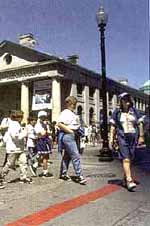 The Boston Common is America's first public park. Originally purchased in 1634 as a training field for militia and for the feeding of cattle, it is bordered by Beacon, Charles, Boylston, Tremont and Park Streets. This is the starting point of the Freedom Trail walk.

Address: Beacon and Park Streets
Cross the Boston Common to the State House. The new State House, located on Beacon Hill, was designed by Charles Bulfinch. Built in 1795 on the land originally owned by John Hancock, the highly valuable majestic gold dome is 23.5 carat gold leaf, covering the original copper placed there by Paul Revere. The State House is open daily for tours to the public.

Address: Park and Tremont Streets
Built in 1809, this church is where the hymn 'America' was first sung on July 4th, 1831 and where William Lloyd Garrison gave the first anti-slavery speech from its balcony.

Address: Tremont Street, near Park Street
Many notable Patriots are buried here including Paul Revere, John Hancock, Samuel Adams and Robert Treat Paine as well as the five men killed in the Boston Massacre. At this site you will also see the graves of Mother Goose, Ben Franklin's parents and many other famous Bostonians.

Address: Tremont and School Streets
Continue down School Street to the statue of Benjamin Franklin, which is situated in front of the Old City Hall. King's Chapel and Burying Ground are located in the right corner. This was America's first Anglican Congregation in Boston, founded in 1688. The present structure was built in 1754 during colonial times. The church became the first Unitarian church in America after the American Revolution. Next door is the burying ground where you will find the resting places of the first Governor of Massachusetts, John Winthrop and Mary Chilton, the first woman to step off of the Mayflower ship, as well as William Dawes, Jr. who finished Paul Revere's 'midnight ride'.

Address: Tremont and School Streets
Located on School Street and marked by a sidewalk plaque, the Latin School is an extension of the First Public School in America. It was attended by Sam Adams and Benjamin Franklin, who was born in Boston. It is also located in front of Old City Hall. 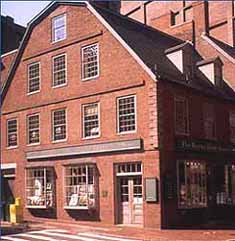 Address: Washington and School Streets
Formerly the Old Corner Bookstore, this building is on the left corner. Originally built in 1712 for Thomas Crease, it is now a contemporary bookstore housing books, maps and globes from around the world. The Global Corner Bookstore was also a meeting place for famous writers such as Longfellow, Emerson, Hawthorne and Oliver Wendell Holmes.

Address: Washington and Milk Streets
In front of the building is an excellent flower stand. Built in 1729 as a Congregational Church, it served as city's Town Meeting Hall, famous for the fiery meeting that led to the Boston Tea Party incident, which caused the port to be closed and brought the country a step closer to rebellion.

Address: Washington and State Streets
This is opposite the National Park Visitor Center, which has an excellent bookstore and toilet facilities. Built in 1713, this site is where you will find the landmark for the Boston Massacre, which took place on March 5th, 1770 and where five patriots were killed. A circle of cobblestones depict the original site. This was the seat of the British Parliament and later the Colonial Government.

Address: Congress and State Street
The Boston Massacre site can be seen from the Old State House balcony where the first reading of the Declaration of Independence was given in July 1776 by John Hancock.

Address: Congress Street
Faneuil Hall is on the right and just behind is Quincy Market - a perfect place to stop for lunch. Peter Faneuil dedicated this building to the City of Boston in 1742. Nicknamed the Cradle of Liberty, this building is where many town meetings took place, presidential candidates debated and is where immigrants are sworn in as American citizens. Situated on the third level is the Ancient and Honorable Artillery Company Museum. Located out front on Congress Street is the famous statue of Samuel Adams.

Address: 19 North Square
Originally built around 1680, this is the oldest home remaining in the city and is where Paul Revere lived from 1770 until 1800 with his two wives and sixteen children. Its restoration was completed by the Paul Revere Memorial Association in 1908.

Address: 193 Salem Street
Originally built in 1723 as a house of prayer for all Bostonians, the Old North is nicknamed 'Christ Church'. In its steeple, Robert Newman hung two lanterns signaling Paul Revere's famous 'midnight ride'. A re-enactment takes place every year on April 19th. There are also excellent views from the top of Hull Street.

Address: Snowhill Street, between Charter and Hull Streets
The cemetery gates are situated on the right. This cemetery was opened in the 1660s and overlooks Boston Harbor and the Charles River. It was used by the British for target practice before the revolution. From this vantage point, one can see Bunker Hill, Logan Airport and the Ship U.S.S. Constitution. 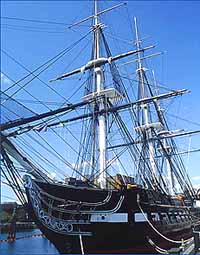 Address: Monument Avenue and High Streets, Charlestown
Sitting at the top of Breed's Hill, the monument offers good views over the navy yard. This obelisk commemorates the first battle of the American Revolution, which was fought here on June 17th, 1775 by 2,000 British soldiers and 1,000 colonials. Take the 294 stairs to the top, ascending 67 meters / 220 feet.

Address: Charlestown Navy Yard, Charlestown.
Adjacent is the Constitution Museum, the trail ends here. The U.S.S. Constitution is the oldest commissioned Navy warship in America's fleet. Each year on July 4th she is towed into the harbor for the ceremonial turning of the ship. Built in 1797, she is open to the public. Located next door is the U.S.S. Constitution Museum containing audio-visual programs, model ships, souvenirs and many items of memorabilia from that era. Having never lost a battle in her long career, in 1997 she celebrated her bicentennial.

African-Americans in 19th-century Boston is the theme of this walk, operated by the National Park Service, which encompasses many historically significant sites. Visit the Robert Gould Shaw and 54th Regiment Memorial honoring the first black regiment to be recruited in the North. Several historic homes can be viewed from the outside. Visitors may also enter the African Meeting House where the New England Anti-Slavery Society was founded. The trail celebrates the history of the local black community between 1800 and 1900, when they settled in this part of Beacon Hill. It passes all the most interesting houses in the area and gives a glimpse of Victorian Boston. It starts at the Shaw Memorial opposite the State House in Beacon Street and ends at George Middleton House. George Middleton was a colonel in the Revolution and commanded an all-black company.

Website: bwht.org
Actually five trails in five distinct city neighborhoods, this self-guided tour presents the stories of some of the city's most prominent female patriots, intellectuals, abolitionists, suffragists, artists and writers over four centuries. The trail, passing through Chinatown and the theater district, highlights buildings where notable women have either worked or lived. It starts at the Old South Meeting House and ends at Tremont Street, where number 174 used to be the Boston School of Cooking, the first professional school in the entire city for women cooks.

Since the founding of Boston, the waterfront has changed out of all recognition. Shipping is now reduced to ferries, sightseeing boats and pleasure craft. Landfill has created a new, modern waterfront with good restaurants, where property is among the most expensive in the city. This walk illustrates some of the changes that have evolved over the centuries. It starts at the Old State House and ends at South Station, which was the biggest railway station in the world when it was completed in 1900.