Boston is a city of both historic buildings and modern architecture, and its public parks and gardens have played an integral part in its overall design for literally centuries. Centrally located Boston Common is the oldest public park in the United States and is undoubtedly the largest and most famous of the town commons around which New England settlements were built many years ago.

Located right next door to the Common, the Public Garden stands just across from the Cheers bar on Beacon Street and is centered around a large boating lake. Also worth looking out for is the wonderful 265-acre / 106-hectare Arnold Arboretum, which is administered by Harvard University and contains over 4,000 types of woody plant, mainly originating from the hardy north temperate zone. 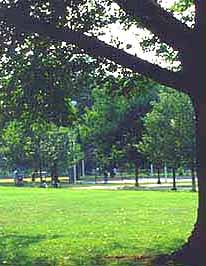 Dating from 1634, Boston Common is as old as the surrounding city and started its life as simple grazing ground for cattle. Today, the park is the site for relaxing and picnicking, and is a place where demonstrators can freely exercise their right to freedom of speech.

Covering an area of 50 acres / 20 hectares, Boston Common contains many important sites, including the Central Burying Ground near Tremont, Beacon Hill and countless statues commemorating important people and events. Purposes have varied over the years and public hangings took place here until 1817. The 'Frog Pond' is actually a concrete depression used as a children's paddling pool during the hot summer days. In winter, the frozen pond is also used for ice skating. The highest point is near the Parkman Bandstand and was once called Flagstaff Hill. Of note, the Common serves as the official starting point of the Freedom Trail.

Address: 125 Arborway, Jamaica Plain, Boston
Tel: +1 (617) 524 1718
The Arnold Arboretum was established in 1872 and despite being set in a dense urban area, provides a tranquil and peaceful space away from the busy city. Visitors will find the grounds at their most spectacular when the rhododendrons, lilacs, magnolias and fruit trees are in full flower, and again in the fall, when the park puts on a fiery autumnal display. The arboretum is just 6 miles / 10 km from downtown Boston and is accessible by MBTA Orange Line or Bus 39 from Copley Square to Center Street. 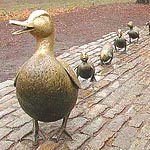 Address: Charles, Beacon, Boylston, and Arlington Streets, Boston
Tel: +1 (617) 635 4505
These beautiful gardens are the oldest botanical gardens in the whole of America, dating from 1837 and containing some of the finest formal planting in the city. Occupying what had previously been salt marshes on the edge of the Boston Common, the main walkways contain large beds that are replanted for spring and summer, to ensure maximum color and impact. At the beginning of May the displays are particularly colorful, containing hundreds of stunning tulips. There are also many mature trees, which are both native and European species.

In the center of the public garden is one of the main features - an irregularly shaped pond, and this has been famous for its pedal-powered Swan Boats since 1877. Along the main pathway between the pond and the park entrance are the well-known 'Make Way for Ducklings' bronze sculptures, which depict a mother duck and her many ducklings taking a walk. This is a tribute to the 1941 classic children's story by Robert McCloskey.
Nearest subway station: Arlington.

Address: 4 Yawkey Way, Boston
Tel: +1 (617) 236 6666
Still home to the famous Boston Red Sox, Fenway Park first opened in the spring of 1912 and stands close to Kenmore Square. Even though this is one of the country's smallest major league baseball parks, with a capacity of around 37,000 spectators, no player has ever hit a home run over its right field. The park is located in an area known as the 'Fens', hence its name 'Fenway'. Year-round tours depart from Gate D on Yawkey Way hourly daily from 09:00 to 16:00 or until three hours before game time, whichever is earlier.