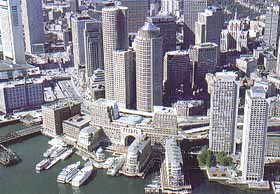 Boston's economy has been growing steadily and strongly since the downturn of the early 1990s and unemployment has remained low. There has been a big investment in private development and construction projects(USD 1.3 million), together with several major public infrastructure investments, such as the 'Big Dig' which is rebuilding tunnels and major roads under the city.

Another positive sign of the city's confidence is the Seaport Public Realm Plan, which is developing 1,000 acres / 400 hectares of sea-front land around the new Boston Convention and Exhibition Center.


The capital of the Commonwealth of Massachusetts and the finance, professional and business hub of New England, Boston's key economic areas are technology, financial services and tourism. The city attracts large numbers of young professionals from its prestigious educational institutions, namely Harvard and the Massachusetts Institute of Technology (MIT), situated in the nearby town of Cambridge. An impressive mix of old and new businesses are currently flourishing in this popular business city. 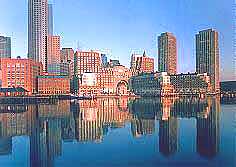 Hours of Business and General Etiquette

Business hours usually range from 08:00 to 17:30, although working late and at the weekend is not unusual. Banks are normally open between 09:00 to 15:00, Monday to Friday, and some of the larger banks also open on Saturday mornings. Working lunches are a popular way to do business in Boston and Americans are quick to use first-name terms. Some exclusive restaurants have a strict dress code, although a more informal, yet presentable dress code is acceptable. Drinks or dinner is a popular way to end the hard working week.

A smoking ban throughout Massachusetts has been effective from 2004. Previously in Boston, many restaurants had a strict 'no smoking' policy, although some tended to cater for smokers in different areas. Now all city offices, restaurants, clubs and bars are strictly non-smoking.