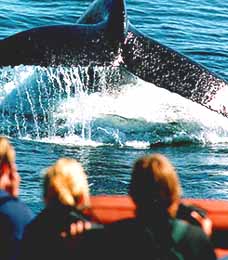 Whales cruise off the New England coast from April to November, gathering at the major feeding grounds of Massachusetts' coast, Jeffrey's Ledge and the Stellwagen Bank, the East Coast's most famous whale-watching destination. These huge mammals reach more than 20 meters / 65 ft in length. Even a fleeting glimpse is a thrilling and very memorable experience. Among the species that can be seen are finback, humpback, minke and right whales. These Northern hemisphere humpbacks reach an average weight of about 37 tons and are among the most endangered. It is estimated that only eight percent of their original population remains.

Whale-watching cruises operate out of most of the major seaports, including Gloucester and Provincetown on Cape Code and Portsmouth, New Hampshire providing an adventure filled with opportunities to view and learn about whales as they frolic in their natural habitat. In Boston, cruises are operated by several companies, including the New England Aquarium. 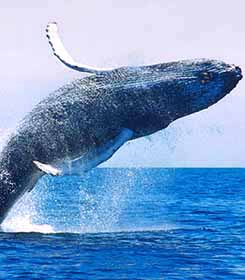 Each of the whale-watching tours are narrated and guided by experienced naturalists. The awe-inspiring sight of these majestic, giant creatures breaching and spouting nearby is more than exciting. The World Wildlife Fund named Massachusetts as one of the world's top ten whale-watching spots. The sea is usually much cooler than land, so be sure to wrap up well, and take your camera.