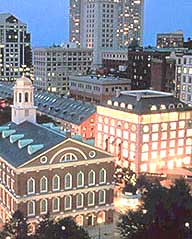 English is the most commonly spoken language in America. There are countless ways to say the same thing in the English language, so, in most cases, don't worry about trying to think of an alternative.

New England was founded on a strongly Protestant base, but today most religions have a presence. Newspapers generally list times of services for the main denominations. However, this cosmopolitan city also has mosques, temples and chapels and synagogues.