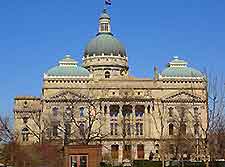 Founded as the proposed state capital of Indiana, the city of Indianapolis lies along the White River and was formerly a swampy region settled sparsely by fur traders, the first of whom, George Pogue, built his log cabin here in 1819.

Another settler, John Wesley McCormick, arrived at the same time in early Indianapolis history, setting up home on the bank of the river. By 1825, the little community was inaugurated on the promise of the river as a transportation route, with Alexander Ralston and Elias Pym Fordham commissioned as city architects. Unfortunately, the river later proved unsuitable for large-scale boat transport.

The city's central location was useful during the American Civil War (1861 to 1865) as a base for Union troops and support services, and it acted as a rallying point prior to the attack on the Confederate South. By the time war broke out, the city was an important rail hub, giving it immediate military importance, and it soon became the site of a major camp for prisoners of war. In spite of immediate threats of Confederate attack, Indianapolis emerged unscathed when the hostilities ended, with the Confederate Army's closest approach hitting the town of Seymour, around 62 miles / 100 km away.

Following the American Civil War, with the east-west National Road completed and the Indian Central Canal making up for the White River's failure to deliver, goods were being transported into the city. The canal became a disappointment, as city funds ran out before it could be extended beyond 9 miles / 14 km from downtown, leaving the arrival of the railroad in 1847 to rescue the city's economy and bankroll its further development. The 'iron horses' of the Jefferson, Madison and Indianapolis Railroad, and other lines, duly fulfilled their initial promises and, between 1850 and 1900, the city's population grew from 8,000 to an incredible 169,000.

The next suburban explosion and shift in Indianapolis history was caused in the early 20th century by the popularity of the automobile, with the city a booming hub for its production and rivaling even Detroit. This resulted in massive new housing developments aimed at auto industry workers. Today's famous motor racing events at the city's Indianapolis Motor Speedway are the only remnants of those heady days. Concurrently, the city had become an important regional transportation hub connecting to Chicago, Cincinnati and St. Louis due to its location at the crossroads of America, and it is still a major trucking center.

By 1913, labor unrest in the street car manufacturing industry threatened to call a halt to the economic growth of the city, with a strike called in October of that year quickly spreading to other labor organizations and trade unions. Panicking business leaders demanded state governor Samuel Ralston to call out the military, with union leaders threatening violence in reprisal. Finally, on 5th November, Ralston placed the entire city under martial law and engaged the Indiana National Guard, but managed to convince a workers' rally of his good intentions, thus ending the strike and causing the creation of labor protection laws, the first in the state.

Cultural, economic and social progress was the hallmark of prosperity in Indianapolis during the early 20th century, boosted by the 1886 discovery of the huge Trenton Natural Gas Field, with oil deposits discovered a few years later. Glass and car manufacturers flooded into the city on the promise of free natural gas to operate their plants, but the boom ended in the 1920s along with the gas supplies, causing an abrupt halt to a golden economic era. Even the oil ran out in the 1930s.

The darkest period in the history of Indianapolis began in the 1920s, although the city had played a historic part in American history as a major stop on the Underground Railroad smuggling African-American slaves fleeing to safety in the north. The head of the Ku Klux Klan in Indiana, DC Stephenson, moved his headquarters to Indianapolis after becoming the Grand Dragon of 23 states. From 1921 onwards, he exercised political and social power in the city, with the Klan taking over the Republican Party and the General Assembly, and electing their own state governor. However, Stephenson's arrest and conviction for rape and murder in 1925 sparked a tremendous backlash, finally resulting in the Klan's demise in 1944.

The modern history of Indianapolis saw the downtown district suffer from decay in the 1970s and '80s, with revitalization taking hold in the 1990s and including the construction of the Circle Center shopping mall and further development of the city's suburbs. Expansion and improvement continue today, as evidenced by the new passenger terminal at the Indianapolis International Airport.