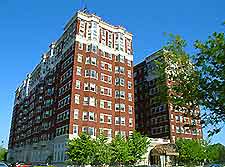 A busy capital city with much to entice visitors, the popularity of Indianapolis is certainly matched by its abundance of accommodation. Hotels are fairly easy to come by all around the city, although if you wish to stay in the city center, close to the attractions, shops and restaurants, then you should understandably expect to pay more for your lodging.

A selection of hotels are to be found close to Indianapolis International Airport (IND), which is just 7 miles / 11 km west of downtown and next to the Mars Hill suburb. Nearby airport accommodation includes the Radisson Hotel on South High School Road, which is located onsite and just a matter of minutes from the terminal. Also very near to Indianapolis Airport and quite reliable is the Hyatt Place on West Bradbury Avenue, and the Residence Inn on West Southern Avenue. 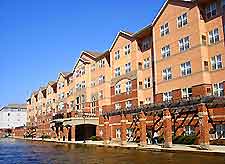 Visitors to Indianapolis should note that hotel prices are generally higher during the months of May, August and September, when race weeks attract large crowds to the city and the subsequent demand for accommodation rises. Hotels close to the famous Indianapolis Speedway are always popular.

Those who are prepared to stay outside of the city will find some very cheap budget hotels lining the Interstate I-465 - a busy freeway encircling Indianapolis. Nearby Castleton and Greenwood are also good places to find inexpensive accommodation, with both of these destinations being around 11 miles / 18 km away and connected by public transport. 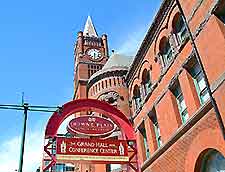 Falling within the mid-range lodging category is a huge choice of three-star accommodation, although in general, the more you pay, the better the rooms and facilities. Quite favorable is the Residence Inn Downtown on West New York Street, which is based alongside the canal walk and close to the Circle Center Mall. Also in downtown Indianapolis, on South West Street, is the Staybridge Suites Hotel, which is directly opposite the enormous Lucas Oil Stadium (LOS) and a mere three blocks away from the Indiana Convention Center. On West Washington Street, the Fairfield Inn and Suites by Marriott is well-placed for access to the White River State Park, the Indiana State Museum and the family friendly Indianapolis Zoo.

Directly linked to the Holiday Inn North at the Pyramids on the northwesterly Depauw Boulevard is the Caribbean Cove Indoor Water Park, where children happily spend hours exploring the Castaway Bay Interactive Island. Those who prefer top-end luxury accommodation may like to consider the antique four-poster beds at the historic four-star Canterbury Hotel on South Illinois Street, or the proximity to the Purdue University campus at the upmarket University Place Hotel on West Michigan Street.

Offering competitively priced four-star accommodation, the Westin Indianapolis Hotel on South Capitol Avenue is actually connected to the RCA Dome by a sky-bridge. Close by, the Hyatt Regency boasts views of the Indiana State House and is stands approximately 6 miles / 10 km from the Indianapolis Motor Speedway.