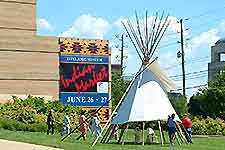 Indianapolis is not famed for having an action-packed calendar of regular annual events and festivals, although there are usually plenty of things to see and do in the Indianapolis area.

The many permanent attractions in Indianapolis play a significant role in contributing to the city's tourist appeal, together with a number of notable seasonal events, such as the Indy 500 Festival, which is held each year in May. Below is a list of the main events, festivals and things to do which fill the Indianapolis calendar each year.