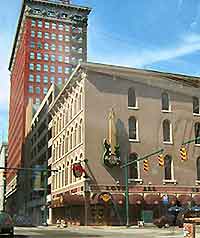 With a population of nearly 800,000, Indianapolis has a lot of mouths to feed and as a result, is home to an array of restaurants, dining venues and impressive eateries. Indianapolis has no shortage of popular restaurants and the downtown district alone offers upwards of 200 establishments, with many more dining options distributed throughout the city.

Besides typical American food establishments, there are a significant number of international eateries now available, ensuring that visitors don't struggle to find somewhere to eat in Indianapolis, regardless of their tastes.

Indianapolis is a modern American city in every way and recognizes that both its residents and visiting population often have cosmopolitan lifestyles, and restaurants in the city cater to their patrons accordingly. The majority of eateries and dining venues in Indianapolis follow opening schedules that are common throughout America's metropolises, while 24-hour diners are always on hand for those seeking sustenance at unsociable hours. 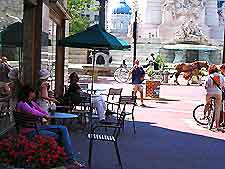 Downtown Indianapolis is one of the best places to head for a drink in the evening, with everything from traditional saloons to Irish bars and bar-grill combinations. Considered to be the hip area of the city, Broad Ripple Village is also home to a good selection of drinking venues, as well as a range of nightclubs.

If you are a visitor to Indianapolis you will find many of the city's hotel restaurants feature fantastic breakfast dining options, offering enticing menus with staples such as oatmeal and eggs, as well as favorites such as biscuits and gravy, breakfast burritos and French toast. Many hotel restaurants and city diners in Indianapolis also offer all you can eat buffets, while coffee and baked goods takeaways are available for commuters. 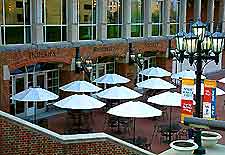 Lunch in Indianapolis can be as restricted or as extravagant as you wish in terms of both time and money. Fast-food restaurants cater to those on tight lunchtime schedules, while a vast range of delis, grills and gourmet establishments cater for those entertaining friends, business guests or people wanting a pleasant lunch alone with a good book.

Downtown is one of the best places to head for dinner in the city, due to the extent of its selection of eating establishments. International dining options are always popular in Indianapolis, with everything from ubiquitous European restaurants to establishments offering more obscure cuisines, such as Middle Eastern or South East Asian delights.

American grills and barbecues are also popular in Indianapolis, with many offering all you can eat deals for those with voracious appetites. Broad Ripple Village, close to the city center, is also home to a wide selection of notable restaurants and eateries.