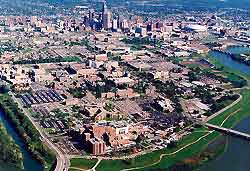 Indianapolis International Airport has become a major transport hub in Indiana and serves around 20 different airlines, which in turn travel to over 100 destinations. Every month Indianapolis Airport handles more than 600,000 passengers and just over 16,000 take-offs and landings.

Previously named the Weir-Cook Municipal Airport, this busy air facility has its origins at the beginning of the 1930s, with its former terminal being built in 1957 and used right up to 2008. Today, the new state-of-the-art Col. H. Weir Cook Terminal stands between the two runways and contains some 46 different gates, only two of which are international, with the remainder being domestic.

Address: 2500 South High School Road, Suite 100, Indianapolis, Indiana IN, 46241, USA
Telephone: +1 317 487 9594
Indianapolis International Airport stands at around 7 miles / 11 km to the southwest of the city center and is just 5 miles / 8 km from the nearby Indianapolis Motor Speedway, being next to the suburbs of Salem Creek and Six Points.

The journey between the city center and Indianapolis Airport is relatively straightforward, via the I-70 Interstate. Major roads nearby include the Sam Jones Expressway, West Washington Street US-40 and the I-465 Interstate loop.

Tel: +1 317 635 3344
Public buses operate at regular intervals each day, traveling to and from the nearby city center. Run by the IndyGo 'City Bus Service', these buses are extremely affordable and reliable, with just under 30 daily routes connecting onward destinations such as shopping centres, tourist attractions, downtown hotels and all of the townships within Marion County. Express services are provided by both Miller Trailways and the Central Indiana Regional Transportation Authority (CIRTA).

The main bus stop is situated next to the ground transportation area. Additional services travel further afield to surrounding towns and cities. These include the Bloomington Shuttle Service and Lincoln Land Express.

Taxi ranks are situated close to the terminal building, at the curbside on the Lower Terminal Drive. 'Call buttons' are available in this area, if no taxis are waiting. The journey into nearby Indianapolis lasts approximately 15 minutes, with minimum charges being applicable, regardless of the length of journey. Of note, you should not have to pay more than the fare displayed on the actual meter, although a tip is always expected.