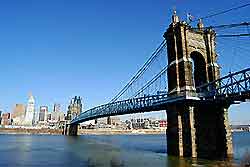 Nicknamed 'Cincy', the city of Cincinnati stretches along the winding Ohio River and is a particularly attractive city, with Art Deco buildings, riverfront areas and interesting neighborhoods. Cincinnati is full of sightseeing opportunities, museums with information about the city's roots, superb shopping districts and an unusual network of Skywalk passages.

Downtown Cincinnati is laid out as an organized gridwork of roads, bounded by the Ohio River, with Kentucky lying across the waterfront, and has become a major Midwestern center of commerce. The famous 'Genius of the Waters' in Fountain Square marks geographical center of Cincinnati and is a spectacular fountain, surrounded by an important plaza area.

Located on the Walnut Street side of Fountain Square is the useful Cincinnati Tourist Information Center, where you can find out about city tourism, hotel availability and popular walking tours. There are many hotels throughout Cincinnati, including a good selection of accommodation situated on Chester Road, East 5th Street, Montgomery Road, Sheraton Lane, Vine Street, West 6th Street and West Sixth Street. Do bear in mind that weekend rates can drop substantially, making luxury hotels all the more affordable, particularly during the quiet winter months. There are also further hotels to be found nearby Cincinnati-Northern Kentucky International Airport (CVG). More information about Cincinnati Hotels. 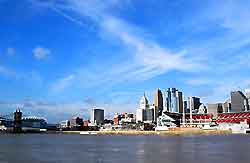 This city features many impressive tourist attractions, including the Cincinnati Zoo and Botanical Gardens - one of America's most famous and oldest zoos, dating back to 1875; the Newport Aquarium - standing on the bank of the Ohio River, including glass tunnels and more than 11,000 marine and freshwater creatures; Coney Island - a popular traditional theme park for over 100 years; the Cincinnati Observatory Center - famous for being the oldest professional observatory in America; Fountain Square - standing in the heart of the downtown district, boasting lively daily entertainment during summer months; the Cincinnati Bengals - one the city's main American Football teams, regularly playing games at the Paul Brown Stadium; and the Cincinnati Reds - another major American football team, whose home ground is the Great American Ball Park.

Other popular tourist attractions in Cincinnati include Carew Tower - the city's tallest building with a popular observation deck, built in 1931; the Showboat Majestic - an iconic boat, providing scenic riverboat cruises and tours along the Ohio River; the breathtaking John A. Roebling Suspension Bridge - the very first bridge to span the Ohio River, being built in 1867; St. Peter in Chains Cathedral - an enormous Roman Catholic building built in the 1840s; and the Bicentennial Commons at Sawyer Point Park - with beautiful gardens, hugging the banks of the Ohio River. More information about Cincinnati Tourist Attractions and Cincinnati Landmarks.

Tourist attractions located close to Cincinnati include Fort Ancient - an important archaeological site built by Native Americans more than 2,000 years ago; Paramount's Kings Island - a superb theme park containing around 85 different rides and attractions, including a major water park and the longest wooden roller coaster in the world; the Dude Ranch - an old Western town with a host of tourist attractions; and the Beach Waterpark - Ohio's biggest water park, with more than 40 water slides and sandy beaches. More information about Cincinnati Attractions Nearby. 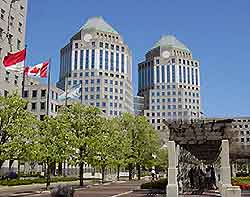 Cincinnati also features many top museums and the city's aptly named Museum Center is actually home to three major museums, the Museum of Natural History and Science, the Cincinnati Historical Society and the Cinergy Children's Museum. Others include the National Underground Railroad Freedom Center - one of the latest additions to the city's growing arts scene; the Skirball Museum - full of information about the history and culture of Jewish people; the Cincinnati Art Museum - with a fine collection of paintings, including work by famous artists such as Andy Warhol and Picasso; and the Contemporary Arts Center - housed in a particularly stylish building, hosting many temporary exhibitions. More information about Cincinnati Museums and Cincinnati Art Galleries.