Getting Around, Ottawa Travel, Transport and Car Rental

Ottawa features an extensive travel and transport network, with plenty of options to suit all needs. The Ottawa/Macdonald-Cartier International Airport serves the area and is a notable travel hub, offering a range of ground transport options.

Public buses in Ottawa are operated by the OC Transpo and this is a popular and affordable mode of transport. Greyhound bus and coach transport is also available in the Ottawa area and travels further afield. Other popular transportation in Ottawa includes VIA Rail trains, bicycle rental and taxi travel.

Address: 1000 Airport Parkway Private, Suite 2500, Ottawa K1V 9B4, Canada
Tel: +1 613 248 2125
Ottawa International Airport (Aéroport international d'Ottawa) is located around 8 miles / 13 km to the south of downtown Ottawa. Although this airport is on the small side, it serves a number of major airlines, such as Air Canada, American Airlines, British Airways, Northwest Airlines and US Airways. Offering a range of ground transport, buses at the airport are a particularly inexpensive way to travel into Ottawa. The Airport Shuttle Bus service is extremely popular and travels to and from many hotels in downtown Ottawa, operating every 30 minutes from 05:00 to midnight, with fewer buses at the weekends. 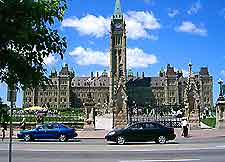 Central rental transport companies are plentiful both at Ottawa Airport and in the city itself. With all of the main rental chains well represented, hiring a car is a convenient way to explore Ottawa's suburbs and nearby attractions. A free car park is available on Saturday and Sunday at the World Exchange Plaza, which is conveniently close to the tourist information center in downtown Ottawa. Further car parks can be found in and around central Ottawa and street parking is also possible, although hours are often restricted.

Tel: +1 613 741 4390
Run by OC Transpo, bus transport in Ottawa is comprehensive and provides travel to a number of central locations, including many downtown areas and along Albert Street, Elgin Street, the Central Transitway, Rideau Street, Slater Street, and into nearby Hull (Gatineau). Bus tickets are reasonably priced and available both on the bus (exact fare only), at the tourist office and in corner stores, where they are often cheaper. Day-pass tickets provide unlimited bus travel and are excellent value for money. STO buses, a separate transport system, operates in the city of Hull. Greyhound bus transport is available at the terminal along Catherine Street, providing a range of long-distance buses and coaches.

The Ottawa train station stands on the city's southeastern suburbs, off Highway 417 Queensway, along Trembley Road. Situated around 3 miles / 5 km from central Ottawa, VIA Rail trains travel to and from Kingston, Montreal and Toronto.

Many of Ottawa's premier sights and tourist attractions are concentrated in the downtown district, within easy walking distance of the central Confederation Square. A good selection of restaurants and shops are also situated nearby and can be reached on foot.

With one of the best bicycle networks in the whole of Canada, cycling is a relaxing way to travel around the Ottawa area. Many cycle paths are available all over Ottawa, including a number of scenic routes. A bicycle route map is available from Ottawa's tourist office and bicycles can be hired per hour / day at the Chateau Laurier.

Many taxi ranks are located in central Ottawa, outside of large hotels, notable restaurants and many nightspots. A huge number of taxi and limousine travel companies operate in and around both Ottawa and nearby Hull.