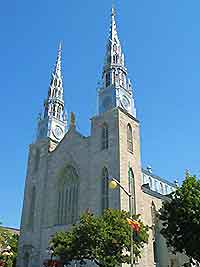 On a visit to the Great Lakes, French explorer Etienne Brulé stopped off here in 1610, followed by French navigator Samuel de Champlain and missionaries. However, unlike Toronto, Montreal and Quebec City, Ottawa wasn't settled by Europeans until 1800, when Philemon Wright arrived for the timber trade.

Irish immigrants came to Canada after the War of 1812, particularly during the Irish famine. Together with Quebecois, they helped to make up the numbers in this unfamiliar land. They would be the workforce, helping to build the world-famous Rideau Canal, which links the Ottawa River in the capital to Kingston on the St. Lawrence River / Lake Ontario.


Early Ottawa became Bytown in 1826, when work on the canal began. The settlement was named after Colonel John By, who was drafted in from England to oversee construction. The Rideau Canal was opened in 1832, allowing for faster and safer transport from Montreal and bringing in much prosperity for the emerging city. Today, this UNESCO World Heritage site is best learned about at the Bytown Museum.

Lumber mills sprouted up along the river and trade boomed, making residents wealthy and leading to the construction of shops, schools and banks. Huge sawmills and rail lines were added, increasing trade dramatically, while a streetcar system was introduced towards the end of the 19th century. The center of action in the Lower Town was the ByWard Market, a farmers' market which was set up about the same time as the Rideau Canal and is still bustling today. 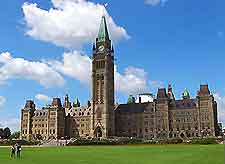 Bytown was incorporated as a city in 1855 and renamed Ottawa, and Queen Victoria made it capital of the province of Canada two years later in 1857. Though smaller and less developed than Montreal and Toronto, the prime candidates for capital, it was considered more defensible against marauding Americans.

Another noted early structure of Ottawa history is the Notre Dame Basilica, the oldest church in Ottawa and an important landmark. It features twin spires and fine stained-glass windows and carvings. Laurier House was constructed in 1878 and was home to former Canadian Prime Minister Wilfrid Laurier. It is possible to visit the 1960s Prime Minister Residence on Sussex Drive, along with the Supreme Court of Canada, for further historical insight.

Despite the drastic fires which razed myriad residential buildings, factories along the waterfront and government buildings, Ottawa recovered quickly. The Greber Plan was instigated in the 1940s to include the building of the Parkway System and greenbelt areas.

The latter stages of the century saw significant modernization and inroads into the high-tech industries. Despite extensive development throughout the history of Ottawa, it is a thoroughly green city, featuring many spacious parks and pathways.