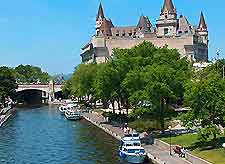 The city of Ottawa contains a broad spectrum of tourist attractions and exciting sightseeing opportunities. The city's main tourist attractions range from scenic river cruises along the Ottawa River to winter cross-country skiing alongside the Dows Lake Pavilion in the city center.

Guided trolley bus tours are always popular and provide a real insight into many of Ottawa's most impressive tourist attractions and historical districts.

For coin collectors visiting the Ottawa area, be sure not to overlook the Royal Canadian Mint, where thousands of commemorative coins are produced each year. 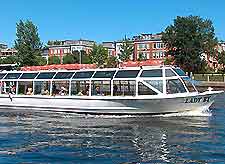 Address: Ottawa River Locks, Ottawa, Ontario (ON), K1N 8S7, Canada
Tel: +1 613 562 4888
One of the most interesting and relaxing ways to tour the scenic Ottawa River and Rideau Canal is by popular riverboat cruises. Operated by a number of companies in central Ottawa, these cruises travel past many of the city's most notable tourist attractions and architectural sights, including the Parliament Buildings and the Prime Minister's Residence. Lasting between one to two hours, Ottawa's sightseeing river cruises are particularly popular and depart from both the Ottawa Locks and Hull Marina. A variety of cruise packages are available, including some where champagne is included.
Open hours: seasonal variations
Admission: charge, discounts for students, seniors and children, children under six free 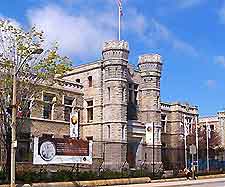 Address: 320 Sussex Drive, Ottawa, Ontario (ON), K1A 0G8, Canada
Tel: +1 613 993 8990
Situated in the Lowertown district of Ottawa, the Royal Canadian Mint dates back to the early 1900s and now produces solely commemorative coins, which have become popular souvenirs of the city. Attractions here include guided tours of the building, which are held in both English and French, and a small souvenir shop.
Open hours: Monday to Friday - 09:00 to 17:30, Saturday and Sunday - 09:00 to 17:30; winter, daily - 09:00 to 17:00
Admission: charge, discounts for children and families 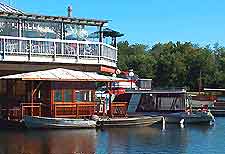 Address: 1001 Queen Elizabeth Driveway, Ottawa, Ontario (ON), K1S 5K7, Canada
Tel: +1 613 232 1001
Dows Lake Pavilion, in central Ottawa, has become a popular tourist attraction, with a range of recreational activities on offer. These include canoeing, paddle boats and other water sports, while during the winter months, Dows Lake Pavilion is the center for nearby ice skating, sledding and cross-country skiing.
Open hours: daily - dawn to dusk
Ottawa tourist attraction admission: 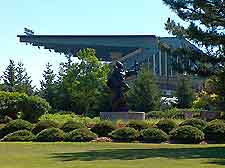 Address: 1015 Bank Street, Ottawa, Ontario (ON), K1S 3W7, Canada
Tel: +1 613 564 1490
Hosting many of the city's largest and most popular events, the Ottawa Civic Center is the home stadium of the 67s and Senators ice hockey teams, who regularly play fast games against each other.
Open hours: hours vary according to event
Admission: charge

Address: 395 Wellington Street, Ottawa, Ontario (ON), K1A 0N4, Canada
Tel: +1 613 996 5115
One of the most important buildings in Ottawa, the National Archives of Canada houses literally millions of historic documents, photographs and maps, amongst other attractions. The National Archives of Canada is also an important research center and was founded in the 1870s.
Open hours: Monday to Friday - 08:30 to 17:00
Admission: free

Address: 395 Wellington Street, Ottawa, Ontario (ON), K1A 0N4, Canada
Tel: +1 613 996 5115
The National Library of Canada stands in central Ottawa, alongside the National Archives of Canada, and contains in excess of 10 million books and publications, with copies of every single manuscript that gets published in the country. Together with its enormous book collection, the National Library of Canada also contains a variety of music and local artifacts.
Open hours: daily - 07:00 to 23:00
Admission: free