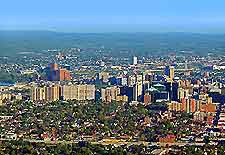 Ottawa is a diverse and particularly friendly city, divided into a number of visible districts, communities and neighborhoods. Containing many exceptional landmarks, locations and sites, Ottawa's districts have evolved since the 1850s and include the Downtown, Glebe, Sandy Hill, Byward Market and Western districts. The downtown district in Ottawa is central to city life and lies alongside both the scenic Ottawa River and the famous Rideau Canal.

One of Ottawa's most popular districts, Somerset Heights was previously known as Chinatown and is the place to visit if you enjoy authentic Chinese restaurants, which are plentiful here. Also worth a look, the twin city of Hull lies across the Ottawa River and features an array of must-see sites. Here are Ottawa's main districts, neighborhoods and locations. 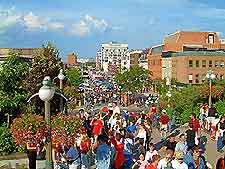 Ottawa's downtown district is the heart of city life and is separated into eastern and western sections by the Rideau Canal, being bounded by the Ottawa River to the north. Home to many of the city's best restaurants, downtown Ottawa also features a number of notable shopping centers, such as the Rideau Shopping Center, a large mall with over 200 shops, and the Sparks Street Mall, a historic shopping district with an array of specialty shops. Downtown Ottawa contains many notable landmarks, including the Parliament Buildings, the National Gallery of Canada and Confederation Park, a popular spot for lunchtime picnics. The core of Ottawa's downtown district is centered around Wellington Street, which is the main thoroughfare on the western side and leads onto Rideau Street. Bank Streets runs off Wellington Street and is the city's premier shopping area, with Confederation Square and Elgin Street nearby. The Rideau Canal runs south through Ottawa's downtown district and offers scenic walking trails, peaceful benches and each winter, the cold weather transforms the canal into a famous ice skating rink.

Standing on the southern side of the Queensway Highway 417, along either side of Bank Street, lies the Glebe district. Part of the downtown district, Glebe provides a particularly high concentration of art galleries and specialty stores. 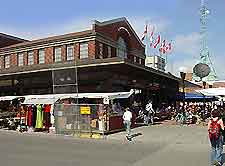 Dating back to the 1840s, the Byward Market district of Ottawa stands between George Street and York Street. This renovated area contains a lively community and each Saturday is transformed when the local market attracts large crowds. Many local arts and crafts are sold in the actual market building, while outside the farmers from the Ottawa Valley and western Quebec sell their homegrown produce. During the summer months, the cafés in Ottawa's Byward Market district often feature outdoor eating areas. The University of Ottawa lies to the south of Byward Market.

To the southeast of downtown Ottawa, Sandy Hill is an important district, where many of the main embassy buildings and institutions are situated. Based around Cartier Street, MacDonald Street and close to Elgin Street, Sandy Hill is bordered by the Rideau Canal. This is an important residential area, with many mature trees and historical houses, and is close to the Byward Market district.

Previously known as the Chinatown district, Somerset Heights stands along Somerset Street West. If you enjoy Chinese and Asian cuisine, be sure to visit Ottawa's Somerset Heights, which offers an array of traditional Chinese and Vietnamese eateries. Just a short walk from this district, Preston Street features an important Italian community, with a number of top Italian restaurants and lively summer festivals.

The western districts of Ottawa are mainly residential areas, where many established local communities live, away from the glitz of the downtown district. Including the Barrhaven, Bells Corners and Kanata areas, Ottawa's western suburbs also contain several notable restaurants, hotels and local companies. 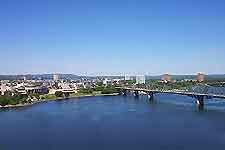 Standing across the Ottawa River, the nearby city of Hull, often known locally as Gatineau, has a population of around 70,000 and is closely linked with Ottawa. Four bridges span the river and connect the downtown district with Hull - the MacDonald Cartier Bridge, Alexandra Bridge, Champlain Bridge, and Portage Bridge, which leads from Wellington Street into the heart of downtown Hull. Situated in Quebec, just minutes away from Ottawa city center, nearby Hull is predominantly French speaking and includes a host of tourist attractions, such as Gatineau Park, the Mackenzie King Estate, Brébeuf Park, the Canadian Museum of Civilization and the Canadian Children's Museum. Although Hull was officially renamed Gatineau in 2001, many of Ottawa's signposts remain unchanged.