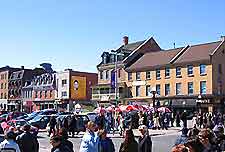 Home to the oldest department store in the whole of Canada, Ottawa is full of shopping opportunities. For the ultimate modern shopping experience, Ottawa's numerous malls will not disappoint and include the Place d'Orleans on the outskirts and the downtown Rideau Center, both of which contain around 200 shops and stores.

Shopping centers in the Ottawa area are generally open between 09:00 to 21:00 Monday to Friday, although many smaller independent shops may choose to close earlier. On Saturdays, a number remain open until 21:00, although some do close between 17:00 to 18:00. Hours on Sundays are reduced, with stores opening as early as 10:00 and closing no later than 18:00. 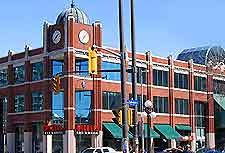 
Bayshore Shopping Center
Address: 100 Bayshore Drive, Ottawa, Ontario (ON), K2B 8C1, Canada
Tel: +1 613 829 7491
Standing on the outskirts of Ottawa, the Bayshore offers a large selection of high-street favorites, including fashion boutiques, a grocery store and a large car park. Also onsite is a popular food court area, where a variety of cuisine is on offer.

Byward Market
Address: Ottawa, Ontario (ON), K1N 7A1, Canada
Tel: +1 613 562 3325
Located within the Lowertown area, Byward Market is an impressive shopping district, with trendy shops, designer outlets, numerous restaurants and a local market at the weekend.

Place d'Orleans Shopping Center
Address: 110 Place d'Orleans Drive, Orleans, Ontario (ON), K1C 2L9, Canada
Tel: +1 613 824 9050
Place d'Orleans is a modern mall, with eye-catching architecture and more than 200 shops, including large department stores such as Walmart. Other highlights include a babysitting service for young children, restaurants and a large car park.

Hudson's Bay Company / The Bay
Address: 73 Rideau Street, Ottawa, Ontario (ON), K1N 5W8, Canada
Tel: +1 613 241 7511
Famous for being Canada's oldest department store, The Bay dates back to the late 17th century and is an enormous store, with various floors and departments, which combine to make this the ultimate retail experience.

St. Laurent Shopping Center
Address: 1200 St. Laurent Boulevard, Ottawa, Ontario (ON), K1K 3B8, Canada
Tel: +1 613 745 6858
The St. Laurent Center lies in the city suburbs and is an impressive mall with many shops, such as The Gap, Toys 'R' Us and Sears, together with a multi-screen cinema.