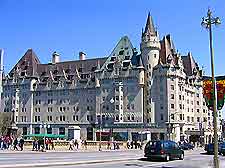 As the capital city of Canada, it comes as no surprise that Ottawa is home to an enormous amount of accommodation, with a large selection of hotels appealing to all budgets and tastes. However, despite the abundance of hotel rooms in Ottawa, large business conferences can result in accommodation quickly becoming fully booked, with lodging rates rising accordingly.

Within excess of 60 major events taking place each year, the city's largest festivals also have a big impact on room availability, such as the Winterlude celebrations in February and the springtime Canadian Tulip Festival. At other times of the year, particularly during weekends, accommodation in Ottawa becomes more plentiful and even the city's most luxurious hotels offer discounted rates. Bed and breakfasts tend to provide the best value for money, together with local inns. 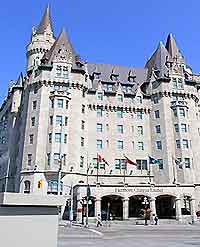 Many of the main attractions in Ottawa are within easy reach of hotels in the downtown district and accommodation is particularly concentrated in this part of the city, with a glut of lodging located around Albert Street and Rideau Street. Close to the Byward Market and Parliament Hill, hotels in downtown Ottawa are never far from restaurants and shops, with the extensive Rideau Shopping Center being a real highlight. Ranging from historic buildings to modern high-rise hotels, the accommodation here is generally well-placed for walking along the scenic Rideau Canal. Popular chains in downtown Ottawa include Crowne Plaza, Days Inn, Econo Lodge, Marriott, Ramada Suites and Westin, with motel strips based either side of the downtown district, along both Rideau Street and Montreal Road.

Close to downtown Ottawa, the city's West End area contains a small selection of hotels and motels, clustered around the Bells Corner area. Including Best Western and Days Inn, accommodation here is reasonably priced and just a short trip from the city center, being well connected by public transport. Additional hotels in Ottawa can be found on the eastern side of the city, in the area known as the East End, and throughout the suburbs, where many family run B&Bs are sited. 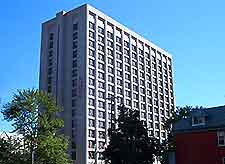 Further hotels stand close to Ottawa, in nearby Ontario towns and villages, such as Cornwall (64 miles / 103 km), Gloucester (6 miles / 10 km), Nepean (17 miles / 27 km), Perth (55 miles / 86 km) and Smiths Falls (48 miles / 77 km). Just 5 miles / 8 km from Ottawa is the city of Gatineau, which is located in the neighboring province of Quebec and known for its historic suburb of Hull. Gatineau offers a number of notable hotels, with brands including Holiday Inn and Ramada.

An array of budget lodging options are available in Ottawa and include two large youth hostels in central locations, which provide inexpensive dormitories and separate rooms. Standing in the Byward Market area, the Ottawa Backpackers Inn is situated along York Street, and the HI International Hostel stands on Nicholas Street, close to Rideau Street and the shopping center. Cheap motels are based along the Boulevard Alexandre-Taché, while for luxury accommodation, consider staying at the either the Fairmont Chateau Laurier on Rideau Street, or at the Marriott Hotel on Kent Street, both of which boast four-star lodging and a convenient downtown setting, being near to the Ottawa Congress Center, the Parliament Buildings and the Rideau Canal.