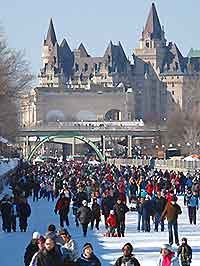 Ottawa is a popular city and visitors are well catered for in terms of annual festivals and local events, with plenty of things to see and do throughout the Ottawa calendar. Canada Day, on July 1st, is a national holiday throughout the country and always celebrated in Ottawa, with a number of exciting events during the day and evening.

Each year in February, the Winterlude Festival is one of Ottawa's most appealing and unusual events, where the frozen Rideau Canal becomes the world's longest ice-skating rink, attracting huge crowds of both skaters and spectators. Other notable festivals and community events in the Ottawa area include the Canadian Tulip Festival in May, the Le Franco Festival in June, Ottawa's International Jazz Festival in July, the Central Canada Exhibition in August and the Ottawa Folk Festival in August.