Ottawa Weather, When to Go and Climate Information 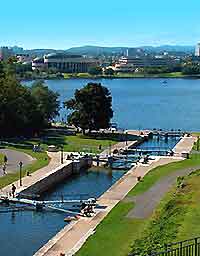 Ottawa, the capital city of Canada, offers a pleasant climate, with distinct seasonal weather. Featuring enormous temperature variations season by season, Ottawa's weather remains mild and even hot for much of the year, generally between April and October.

On occasion, extreme temperatures have been recorded in the Ottawa area, at both ends of the scale, including highs of over 37°C / 99°F, and winter lows of below 30°C / -22°F, although this weather and climate is unusual in Ottawa.

Spring is an exciting time of the year in Ottawa, with melting snow and plants emerging from their winter dormancy. Average daytime temperatures during March begin to reach around 5°C / 41°F at the end of the month, with sunny weather in April resulting in peaks of more than 15C / 59°F, indicating that Ottawa's summer is well on the way. However, night-time temperatures at this time of the year can be chilly and out of the sun, temperatures drop dramatically. 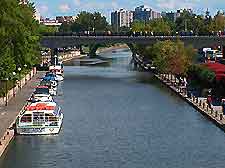 The summer is always a popular time to visit Ottawa and the hot weather is perfect for exploring the city and canal. Many of Ottawa's main outdoor festivals are held during the fine summer weather, including the celebrations at the beginning of July on Canada Day. Affected by the Ottawa River, summers in the city can at times be humid and on occasion windy. Ottawa's summers are usually from late May to September, when the sunny weather results in daytime temperatures of well above 20°C / 68°F, peaking at above 30°C / 86°F on occasion in mid-July.

Generally a fairly mild season in Ottawa, fall colors and Halloween events are always a highlight at this time of the year. By late September, Ottawa's weather and climate is starting to change, with temperatures beginning to drop, although still remaining warm. October sees temperatures of 15°C / 59°F by day, falling towards the end of the month, with nights feeling rather cold. Occasional snowy weather is commonplace as the colder months of winter approach. 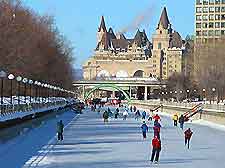 Ottawa's winter weather and climate is cold, snowy and surprisingly appealing. The frosty winter weather transforms the city and a whole new range of seasonal activities present themselves, including cross-country skiing. Without doubt, one of the winter highlights in Ottawa is when the Rideau Canal is frozen, becoming the longest ice-skating rink in the whole world, attracting crowds of both locals and visitors.