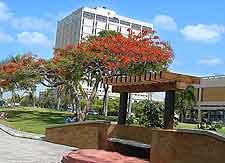 Kingston is without question the capital of the Jamaican dining scene. There are numerous restaurants and eateries spread throughout the city of Kingston, particularly within the uptown area, and tastes include Chinese, European and Indian. Flavoursome Jamaican dining is of course also well represented, yet is usually an acquired taste, with spicy dishes being the norm. Goat soup and goat curry are specialities among the natives.

The best thing with dining out in Kingston is that the food and drink is relatively cheap, and certainly cheaper than when eating out in Montego Bay or Ocho Rios. If you do decide to go upmarket, there are many restaurants and eateries that won't break the bank. In the evening, al fresco dining in the open air will likely be a real treat, particularly when it comes with a view. 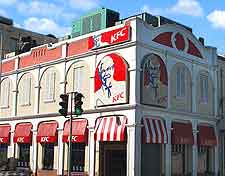 What to Eat, and Where

There are loads of decent restaurants around Kingston, down at the harbour, around William Grants Park and over on Port Royal, where visitors can sample the best of Jamaican cuisine and international dishes. The standalone Indian restaurant on Holborn Road, known as Akbar, has arguably the best tandoori chicken in town.

Some of the finest Kingston dining can be enjoyed in the city's more upmarket hotels. These include the likes of the Four Seasons, the Mayfair Hotel and the Courtleigh Hotel, where service is generally assured. Restaurant prices here are a little steep, but nothing prohibitive. 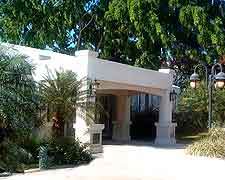 Other popular eats are to be found at the Indies Hotel, which offers good English food and Jamaican buffets, and the Devonshire Restaurant within the grounds of the Devon House, where the seafood grill comes highly recommended. The Le Meridien Pegasus is another noted venue and features a number of eateries, from casual to fine dining with all-round ambience.

Those who are in Kingston in the early part of November can enjoy the Kingston Restaurant Week. This week-long event takes in the city's contributions to Jamaican cuisine, where several top restaurants offer three course dinners at a fixed price. Many big name eateries get in on the event, and both Montego Bay and Ocho Rios also take part.