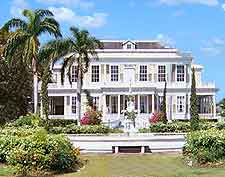 Kingston landmarks and sights run the gamut, from the old days of British colonial rule where fortifications dotted Port Royal, to 19th-century Jamaican architecture at its grandest. There are also several parks in the city with noted monuments, not least that of the National Heroes Circle at the National Heroes Park.

Devon House is a must-see Kingston landmark, built by the country's first black millionaire. Fort Charles on Port Royal is also right up there for culture vultures, as is the nearby Giddy House, while Gordon House, the Jamaica House, the King's House and the Holy Trinity Cathedral all provide further interest for those visiting this city. 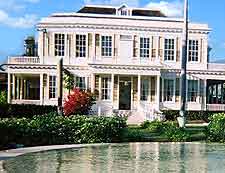 Address: 26 Hope Road, Kingston, Jamaica, JM
Tel: +1 876 926 0815
Jamaica's premier black millionaire, George Stiebel, had Devon House built in the latter part of the 19th century. This prominent local landmark lies amid stunning landscaped grounds near the city centre and is in Jamaican style, with shuttered windows and high ceilings. Although the interior has been renovated over time, visitors can get a real sense of 19th-century Jamaican opulence, with many of the original antiques and paintings remaining in place. Highlights include the games room, the sewing room and the gambling room, while there are also craft shops and a couple of excellent restaurants onsite, namely Norma's and the Grog Shoppe. Each year on Emancipation Day (1st August), Devon House is known for its exciting celebrations.
Open hours: Mansion, Monday to Saturday - 09:30 to 17:00; gardens, Monday to Saturday - 09:30 to 22:00; courtyard, Monday to Saturday - 10:00 to 18:00
Admission: free, charge for tour 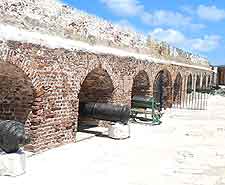 Address: Port Royal, Jamaica, JM
Fort Charles is the main structure in nearby Port Royal and in fact, it is the last remaining fort there. The late 17th-century earthquake and tsunami that laid waste to much of the peninsula all but completely flattened the other five fortresses. Interestingly, it was at Fort Charles where between 1779 and 1780, famous British naval hero Horatio Nelson was once based. Fortifications and cannons remain onsite overlooking the harbour, with the views of the Blue Mountains being especially good from here.
Open hours: daily
Admission: free 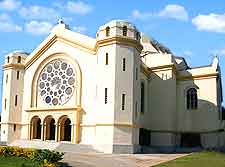 Address: 1 George Headley Drive, Kingston, Jamaica, JM
Tel: +1 876 922 3335
The Holy Trinity Cathedral of Kingston is a historic Roman Catholic church and was completed in 1911. Featuring a copper roof, many stained-glass windows and one of the Caribbean's biggest pipe organs, the cathedral has enjoyed much restoration work and is now listed as one of the Jamaica National Heritage Trust's National Landmarks. The funeral of Jamaica's fourth Prime Minister, Michael Norman Manley, took place here in 1992 and was attended by many important dignitaries, including the likes of Cuban President, Fidel Castro.
Open hours: for services only, Monday to Friday - 05:30, Sunday - 08:30
Admission: free 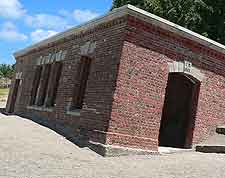 Address: Port Royal, Jamaica, JM
The Giddy House is a fun sight to take kids to, as it is rather tilted and partially sunken. The former Royal Artillery Store on Port Royal succumbed to the big earthquake in the 1600s, although is still largely intact. Visitors can still walk inside it and take some pictures, but need to mind their step for fear of toppling over. The Giddy House is not far from Fort Charles, and so you may wish to combine your visit.
Open hours: Monday to Thursday - 10:00 to 17:00, Friday - 10:00 to 16:00
Admission: free

Address: South Parade, Kingston, Jamaica, JM
Tel: +1 876 948 0065
This late 17th-century white church at William Grant Park is a major Kingston landmark. It lies at the southern end of the park, along the South Parade, and was rebuilt in concrete after the big earthquake of 1907 flattened it. The interior of the Parish Church is as a real church should be, austere, and contains the tomb of Admiral Benbow, a noted Royal Navy commander from the 17th and 18th centuries.
Open hours: daily
Admission: free

Address: 1A Duke Street, Kingston, Jamaica, JM
Although not a must-see landmark, save for those with an interest in Jamaican history and politics, the Alexander Bustamante House is a worthy sight. This former Jamaican national hero had his office here, although you cannot enter. There are also no markings or signposts to let you know that this was his house, but you will find it at the southern end of Duke Street, near Water Lane.
Open hours: not open to the public
Admission: free, view from outside only

Address: Corner of Beston Street and Duke Street, Kingston, Jamaica, JM
Tel: +1 876 922 0200
Located just a short distance to the north of Headquarters House, Gordon House is where the Jamaican parliament meets on a regular basis. Built in 1960, this building may be of great local importance, but is actually rather lacking in character, being a mixture of white-washed concrete and red brickwork. Although Gordon House may not be open to the general public as such, you can arrange to visit and watch the parliament debates, with both the Senate and the House of Representatives meeting in the single chamber at different times.
Open hours: by prior arrangement only
Admission: public galleries - free 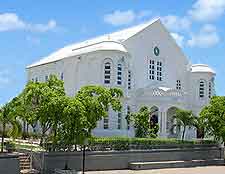 Address: Corner Charles Street / Duke Street, Kingston, Jamaica, JM
Tel: +1 876 922 5931
As the only synagogue in the whole of Jamaica, this is a very important religious landmark. The Jewish Synagogue dates back to 1912 and was built after its predecessor succumbed to earthquake damage in 1907. Visitors will find many fine and interesting features within the interior, such as a grand wooden staircase and a sandy floor, which has long been used to quieten footsteps, symbolising the time when Jews had to once practice their religious beliefs in secret.
Open hours: hours vary - prior arrangement with the caretaker may be necessary
Admission: free, donations suggested

Address: National Heroes Circle, Kingston, Jamaica, JM
Wolmer's School resides on the northerly side of the National Heroes Park and is an highly acclaimed and somewhat prestigious educational institution, founded as far back as the early part of the 18th century. Over the years, the school has produced many famous Jamaicans, including governor generals, politicians and even prime ministers. The school was founded at the request of John Wolmer, a wealthy goldsmith from Switzerland, who lived here for over 20 years. Ever since it opened, Wolmer's School has promoted equality at all levels. Close by, the Mico Teachers College is also of note and was originally used to educate released slaves.
Open hours: daily
Admission: free

Address: Corner of Eastwood Park Road and Hagley Park Road, Kingston, Jamaica, JM
Tel: +1 876 968 9366
The Anglican St. Andrew Parish Church is often better known as the Half Way Tree Church and is especially historic, since it has its feet firmly in the late 17th century. First impressions of this church will likely find the exterior rather uninspiring, but the inside is definitely more impressive, with colourful stained-glass windows and a grand pipe organ. The surrounding graveyard is quite attractive and worthy of a quick stroll around.
Open hours: services, Tuesday - 09:00, Wednesday - 06:30 and 09:30, Sunday - 06:30, 07:30, 09:45 and 18:00
Admission: free 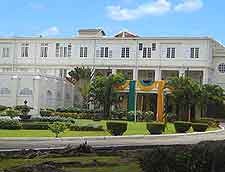 Address: Corner of Hope Road and East King's House Road, Kingston, Jamaica, JM
Close to Jamaica House and sited within the northerly Grants Pen neighbourhood, King's House is also near to the Mayfair Hotel and the Canadian Embassy. King's House dates from the latter part of the 19th century, being rebuilt in 1908 after being one of the city's many earthquake victims in 1907. The new and improved design includes reinforced concrete, although remains quite authentic to the original, despite considerable fire damage during the year of its construction. If you are lucky enough to arrange a tour, you will find the dining room particularly grand, with its enormous portrait paintings of Queen Charlotte and King George III.
Open hours: by prior arrangement only, Monday to Saturday - 09:00 to 17:00
Admission: free

Address: Hope Road, Kingston, Jamaica, JM
Located just a relatively short walk away from Devon House is Jamaica House, a grand building constructed in 1960 and known for its palatial facade, with stone columns and an ornate portico adorning the entrance. This house formerly served as the official residence for the prime minister of Jamaica, although today is used to accommodate the prime minister's office. Visitors are not able to enter the building as such, only to admire its grand frontage and gardens from a distance.
Open hours: not open to the public
Admission: free, view from outside only