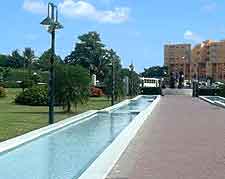 Kingston has a varied collection of tourist attractions, although it is fair to say that this is not the most intriguing of Caribbean capitals when it comes to actual sightseeing. There are a number of beaches in Kingston and nearby, although tourists don't really come here for the beaches, and the city is rather a sprawling place if truth be known.

It is important to know where you are heading in Kingston, as there are some unsavoury areas, such as Trent Town, which should only be seen by day. Tourists will find that the Hope Botanical Gardens and William Grant Park are nice and peaceful, as is Lime Kay during the week. For a dash of colonial attractions and architectural sights, take a walking tour from the Ocean Boulevard, stroll along the Parade, or pay a visit to the Coke Memorial Hall. 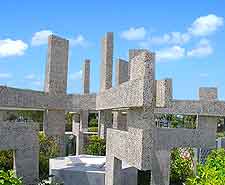 A walk around downtown Kingston is well worth considering, and if you stick to the main streets during sensible daylight hours, you can sightsee without incident. However, if you are at all concerned about walking unaccompanied, then consider taking a friendly local with you, or hiring yourself a taxi. A popular self-guided walking tour starts on the Ocean Boulevard, just back from the harbourfront, and then heads northwards, passing the:


This walk is around 4 km / 2.5 miles in length and will take you anywhere between two and four hours, depending on how fast you walk and how often you choose to stop off to admire the sights along the way.
Open hours: daily
Admission: free 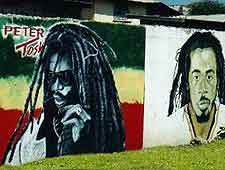 Address: Trench Town, Kingston, Jamaica, JM
Right in downtown Kingston is the heart of yesteryear, Trench Town. This is where reggae and ska music were said to have originated. The neighbourhood was set up as a swanky housing project in the 1930s by the British, although today is a depressing area that should only be seen by day and preferably with an official TTDA (Trench Town Development Association) guide. The Trench Town Museum is a highlight, while other attractions include both the Culture Yard - just off Marcus Garvey Drive, and Bob Marley's former home on Second Street.
Open hours: daily
Admission: free, charge for some sights 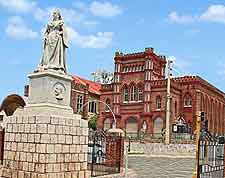 Address: East Parade, Kingston, Jamaica, JM
Residing at the eastern end of William Grant Park, along the East Parade, is the Coke Memorial Methodist Church. This somewhat fortified structure has a typical Methodist-style facade and hails from the mid-1800s. The Georgian building was revamped in the early 1900s after an earthquake and features fortress-like crenelations, together with foreboding red-brick architecture. Inside, the hall can seat around 2,000 people.
Open hours: daily
Admission: free 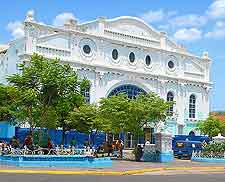 Address: The Parade, Kingston, Jamaica, JM
The busy heart of the city's downtown district is often referred to as 'The Parade', and this part of the city comprises the various streets based around William Grant Park. A number of sights are dotted along the Parade, such as the Kingston Parish Church, which lies on the stretch known as the South Parade, and the Ben Dung Plaza. Close to the church you will discover all manner of street vendors and plenty of loud reggae music, while on the North Parade are attractions such as the Bramwell Booth Memorial Hall and the Ward Theatre.
Open hours: daily - 24 hours
Admission: free 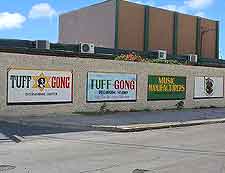 Address: 220 Marcus Garvey Drive, Kingston, Jamaica, JM
Tel: +1 876 937 4216
The Tuff Gong Recording Studios gained their name from the founder, the one and only Bob 'Tuff Gong' Marley, and have occupied a number of different premises before ending up here, on Marcus Garvey Drive. Hit songs continue to be recorded and mixed here, and guided tours are available, lasting around 45 minutes. An onsite gift shop sells a huge quantity of music, together with much Bob Marley memorabilia and lots of Jamaican-style T-shirts.
Open hours: daily - phone ahead first to ensure that studios are not being used
Admission: charge 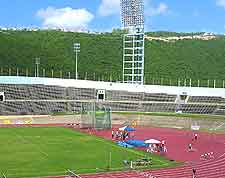 Address: Independence Park, Arthur Wint Drive, Kingston, Jamaica, JM
Tel: +1 876 929 4970
The National Stadium is part of the Independence Park complex and dates back to the early 1960s, when it was built for the 1962 Central American and Caribbean Games. Soon after, the British Empire and Commonwealth Games were also held here, in August 1966. This particular event was of great significance, since it was the very first time that these games had ever been hosted outside of the 'White Commonwealth' countries, with Jamaica achieving four silver medals and eight bronze medals. Today the Kingston stadium is used mainly for staging football matches and functions as the home ground of the Jamaica Football Federation (JFF), being able to comfortably accommodate some 35,000 spectators. A statue of Donald O'Riley Quarrie stands at the entrance, a Jamaican athlete who is most famous for sprinting his way to a gold medal in the 1976 Olympic Games. Close by, further sporting attractions include both the National Arena and the National Indoor Arena.
Open hours: hours vary according to event
Admission: charge for football matches and other events