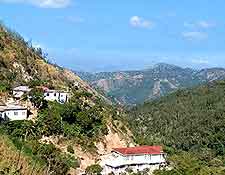 The Blue Mountains are a major draw card out of Kingston and offer tranquillity, along with a cooler atmosphere, hiking trails and birdwatching opportunities. The foothills start not far north of the city environs and make an easy day trip. There are several other attractions nearby, including old Spanish-style destinations and glitzy resorts.

Spanish Town was the former capital and by road is only 30 minutes to the west of Kingston. This city has many fine Spanish and English colonial attractions and is ideal for an excursion. For some history about the rebellion, Morant Bay is a worthy choice to the east, while the rich resort of Ocho Rios is up on the north coast.


The ancient suburb of Port Royal was actually once the original city, based on the sliver of land that comes around to form Kingston Harbour (the Palisadoes Peninsula). Port Royal was settled in the 1500s and had many attractive old buildings and forts, until an earthquake and tsunami wrecked the city. Some parts still remain today, however, and you can check out Giddy House and Fort Charles, as well as take in the various seafood restaurants.

Lime Kay is close to Port Royal and features a pleasant beach, while to the east of Kingston you will find attractions such as the Rockfort Mineral Baths and Bull Bay, where the Cane River Falls provides an appealing spot for bathing. 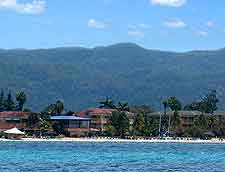 Although not of the grandeur of Australia's Blue Mountains, the Blue Mountains of Jamaica are at least more accessible and retain a distinct blue tinge.

Just 30 minutes from Kingston, this mountain range stretches to about 20 km / 12 miles in width, giving much scope for exploration by car or on foot. Strawberry Hill is a big attraction up here, with its many 19th-century Georgian cottages and spa. 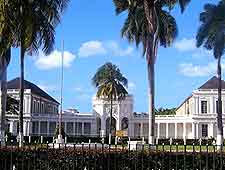 Spanish Town is just off to the west of downtown Kingston, being approximately 27 km / 17 miles away, and was once the capital of Jamaica for more than 300 years. The city was set up by the Spanish in the 1600s and is loaded with old buildings, including the English Cathedral (San Jago de la Vega Cathedral) and several other noted structures, which are at their best around the Parade Square. Amongst the main attractions in Spanish Town are the National Archives, the House of Assembly, the Courthouse Ruins, the Old King's House, and the People's Museum of Crafts and Technology. Close by, keen golfers may like to play a round at the Caymanas Golf and Country Club. 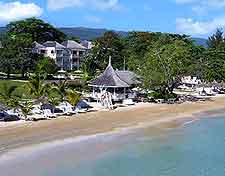 This exclusive and extremely picturesque beach resort is up in the east of the island, across the mountains, being some 80 km / 50 miles to the north-east of Kingston. Port Antonio is especially laid-back and makes for a great day trip destination, or better still, a couple of nights. The beaches here are mostly rocky, yet serene, and there is also some good jungle hiking. The Blue Lagoon is a must-see Port Antonio landmark, while the town itself is attractive, with sights such as DeMontevin Lodge, the ruins of Fort George and Navy Island. Additional attractions in this area include Fisherman's Cove, Boston Bay and the Rio Grande Valley. 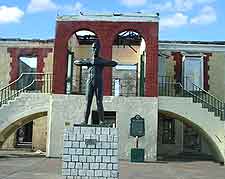 Known for the Morant Bay Rebellion in the mid-19th century is this pretty chilled town on the south-east coast, just 56 km / 35 miles to the east, although it has to be said that this town is not everyone's 'cup of tea'. National hero Paul Bogle led the rebellion against colonialism and his statue can be seen, but the courthouse is long gone, being destroyed in 1865, during the rebellion. There are some nice beaches nearby, and if you are lucky enough to arrive on October 11th, then you will find the Paul Bogle Day celebrations in full swing. 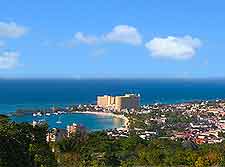 If you have time and enjoy luxury hotels and shopping, consider heading up to Ocho Rios, just under 90 km / 56 miles to the north of the capital. This vibrant resort town has several beaches and noted side attractions, and is a popular cruise ship stop-off for moneyed folk. Most of the digs here are of the all-inclusive variety and the shopping malls are all-encompassing. Visits to the Island Village entertainment park, the Turtle River Park, the Reggae Xplosion museum, the Dolphin Cove, the Dunn's River Falls and Harmony Hall all come recommended.

Address: Castleton Gardens, Jamaica, JM
Tel: +1 876 927 1257
Covering more than 25 acres / 10 hectares, the Castleton Gardens lie alongside the Wag Water River and are filled with exotic plants (more than 1,000 different species), being first established in the middle of the 19th century, with literally hundreds of plants shipped over from London's very own Kew Gardens. The Castleton Gardens actually started life as a sugar plantation and now feature good visitor facilities, including a cafe, a gift shop, a picnicking area and a camp site.
Open hours: daily, April to October - 07:00 to 18:00; November to March - 07:00 to 18:00
Admission: free 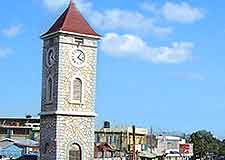 May Pen is situated within the Clarendon parish, where it is the capital, and is around 61 km / 38 miles to the west of Kingston, being sited between Mandeville and Spanish Town. This is a busy market town and its Denbigh Agricultural Show each August is a real highlight. If you are taking a day trip to May Pen, you may like to pay a visit to Halse Hall, which dates from the 17th century and is steeped in Jamaican history, although guided tours do need to be arranged in advance. Roughly 30 minutes away and to the south-west is the Milk River Bath, a popular spa based around a natural hot spring which is slightly radioactive. Farquhar Beach is close to the Milk River Bath, and from here, you can arrange boat trips to find the elusive local manatees living around the Alligator Hole River. 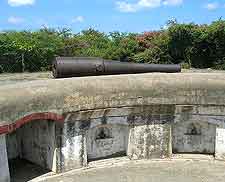 Founded around 500 years ago and lying 28 km / 18 miles to the south-west of Kingston, at the far end of the Palisadoes, Port Royal is a small village with a fascinating heritage, since this used to be the Caribbean's pirate capital. This area has even been used as a film location for the hugely successful Pirates of the Caribbean movies. Today, Port Royal offers little to remember these pirate days, thanks in no small part to devastating earthquake damage in 1692, when much of the town actually sank into the sea, particularly the northern areas of reclaimed land. 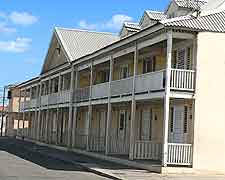 The further earthquake of 1907 saw more damage, although Fort Charles and St. Peter's Church are both still standing. The Maritime Museum at Fort Charles is the best place to come if you are interested in Port Royal's naval and pirate history. There is even a platform where a young Horatio Nelson once kept look out for enemy ships.

A sizeable residential suburb located 15 km / 9 miles to the west, Portmore is connected to the city by the Portmore-Kingston Causeway. Home to a small harbour, the Port Henderson fishing hamlet and some attractive 18th-century architecture, Portmore's most visited tourist attractions include Fort August - dating back to 1740, the Apostles Battery - known for its superb harbourfront views, and the Caymanas Park - where horse racing is available every Wednesday and Saturday. The Caribbean Heritagefest each October is another good reason to take an excursion here. 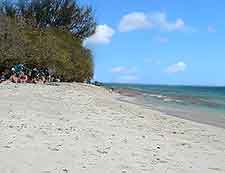 Address: Kingston, Jamaica, JM
Lime Kay is a small islet / cay residing at the mouth of Kingston Harbour. Located just offshore from Port Royal (accessible by boat from there), this popular spot comes with a hotel and a nice beach. Food and drink are available from the hotel, while camping is also possible here. Lime Kay gets crowded on weekends, particularly around its beachfront and bars, and is best seen in the week when it is much quieter.