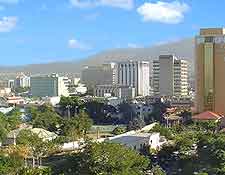 
The following comments about attractions in Kingston have been posted from individuals. We believe that the best reviews of Kingston, Jamaica are written by travellers and holiday makers who have experienced Kingston first hand and want to share their thoughts. Can you share yours? Please help us expand this section of our Kingston World Guide.


Let us know what you think about the attractions in Kingston, Jamaica.

Re. Just had to be done
Don't feel embarrassed for doing the obvious things - they're popular for a reason. Now that you're into your reggae though I would recommend some of the tours that show you where the pioneers of reggae and dub such as Lee Perry and King Tubby were born and raised, as well as where they honed their craft.
Posted on 21/9/2011 by TJ

Just had to be done
I know it's dead obvious but it just had to be done - a visit to Bob Marley's former home, which is now a museum. It was great learning more about the humble beginnings of this world-changing artist and there was plenty of memorabilia. The informed staff were happy to answer all questions we threw at them. Although it was an entirely different case before I left the UK, I'm now hooked on reggae and can't get enough!
Posted on 9/9/2011 by T Forde

The one stop for outdoor lovers in Kingston
We were left breathless by the Blue Mountains as we made our way through dense tropical jungle terrain with the help of a local guide. He then took us to his home and we ate authentic West Indian food with his family. Of course I can't promise this to everyone but the mountain experience alone will leave you hungry for more. We went more than once!
Posted on 20/1/2010 by Elaine Woodhouse

Re. A tucked away hidden gem
Unfortunately there wasn't that much of the mentioned sculpturing when I went there but the Barrington exhibition was still enough to leave me satisfied.
Posted on 8/10/2009 by Marie B.

A tucked away hidden gem
I gained more knowledge on Jamaica's history through the art of the national gallery with pieces from the early 20th century to the present day on display for all to gaze at. Fans of Edna Marley's sculpturing will not want to miss this.
Posted on 8/10/2009 by James Ray

Old pirate haunt without so many sticky fingers as before
We read plenty of old tales on Port Royal long before booking our Kingston/Jamaica trip and are certainly glad that things have been calmed down. It's now being pushed as a leading tourist attraction and the fort is captivating although you still need to stay on your toes, which makes it that bit more intriguing in my eyes.
Posted on 22/4/2008 by R Maddington