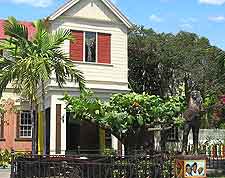 There are several worthwhile museums and similar attractions to check out in Kingston. Bob Marley is covered well at the Bob Marley Museum and, to a lesser extent, at the Trench Town Museum. Many devoted fans come to Kingston just to visit the museum alone.

Those interested in the roots and rise of culture in Jamaica should take a look at the African-Caribbean Heritage Centre, while other notable offerings in Kingston include both the Headquarters House and the Institute of Jamaica. Lying on the southern side of East Street, the Institute of Jamaica is home to a mixture of permanent natural history collections and visiting displays, along with the National Library. 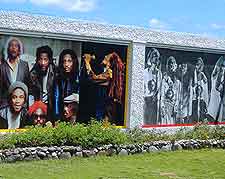 Address: 56 Hope Road, Kingston, Jamaica, JM
Tel: +1 876 927 9152
Perhaps the top attraction in Kingston is the Bob Marley Museum. Jamaica's most famous son had his home and recording studio here, and it remains loaded with memorabilia and personal belongings relating to this global reggae legend.

These items include various gold and platinum records, a favourite shirt often worn on stage, and some Rastafarian cloaks. 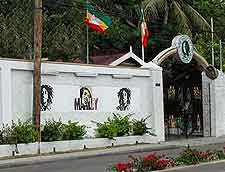 This wooden house is packed with interest and is very much a shrine to the life and musical creations of the great man himself. The forecourt features a colourful statue of Bob Marley, while the hour-long guided tours will lead you to the room where Marley once survived an assassination attempt - you can still see the bullet holes. Tours run from 09:30 to 16:30 and last an hour.
Open hours: Monday to Saturday - 09:30 to 16:00
Admission: charge (US dollars) for tourists, discounts available for children

Address: Orange Street, Kingston, Jamaica, JM
Tel: +1 876 922 4793
The African Caribbean Heritage Centre of the Institute of Jamaica covers the African Diaspora and Jamaican's rich history of folklore. This attraction has an interesting little gallery, as well as a library, and is also known to stage the odd dance performance, reading and lecture. Onsite is the popular Memory Bank exhibit, which teaches the story of Jamaica and its rich heritage.
Open hours: Monday to Thursday - 08:30 to 16:30, Friday - 08:30 to 15:30
Admission: charge 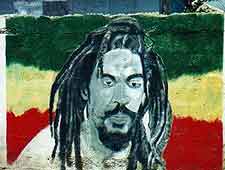 Address: 6-10 Lower First Street, Trench Town, Kingston, Jamaica, JM
Tel: +1 876 948 1455
Residing in the down-at-heel Trench Town area of Kingston is this small museum. It was here where Bob Marley and his wife Rita kept a bedroom before his rise to iconic status. There is a variety of memorabilia in the museum, including Bob Marley's first guitar, numerous photographs of him in Trench Town, and an ancient VW bus originating from the days of Bob Marley and the Wailers.
Open hours: daily - no official opening times
Admission: charge (includes admission to the Trench Town Culture Yard), extra for guide

Address: 79 Duke Street, Kingston, Jamaica, JM
Close to the North Parade and the George William Gordon House is the Headquarters House, which is around a couple of blocks to the north-east of William Grant Park and the Ward Theatre. The Headquarters House was built by a local man named Thomas Hibbert (a member of the Assembly), who entered a competition to build the city's finest house in the city. Although it seems that he lost, this house is nevertheless a good example of Jamaican architecture at its best and in 1872, after Kingston took the crown of capital from Spanish Town, the building was used as the seat of the Jamaican Legislature until 1960, when Gordon House became the new home. Since the 1980s, the house has been used by the Jamaican National Heritage Trust and now functions as a museum-type attraction. Visitors are welcome to explore the rooms, the debating chamber and the galleries of portraits, as well as the lookout tower.
Open hours: Monday to Friday - 08:30 to 16:30
Admission: free 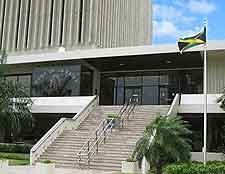 Museum of Coins and Notes / Bank of Jamaica

Address: Nethersole Place, Kingston, Jamaica, JM
Tel: +1 876 922 0750
Close to both Gordon House and the Jamaican Conference Centre, the Bank of Jamaica stands on Nethersole Place, alongside the harbourfront and just off Port Royal Street, on the eastern side of the Ocean Boulevard. Outside is a prominent statue of notable financial figure Noel Nethersole, who held the role of Chief Minister of Finance between the years of 1955 and 1959, when he recognised the need for a Central Bank and Stock Exchange. The bank is where you will find the Museum of Coins and Notes, clearly documenting the country's monetary system with examples of the currency used over the years.
Open hours: Monday to Friday - 09:00 to 16:00
Admission: free

Address: 10 - 16 East Street, Kingston, Jamaica, JM
Tel: +1 876 922 0620
As well as the various exhibitions, the Institute of Jamaica is also home to a large lecture hall and the National Library of Jamaica, where an array of documents and newspapers from the past 200 years are kept. Another onsite attraction is the city's Natural History Museum, which was founded in 1879 and has its entrance on Tower Street. Visitors will find an assortment of stuffed animals and birds, a collection of dried plants, and some geology exhibits.
Open hours: Monday to Thursday - 09:30 to 16:30, Friday - 09:30 to 15:30
Admission: charge, discounts available for children