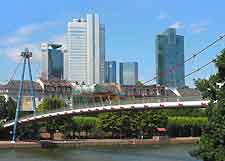 With some of the biggest and most architecturally interesting buildings and landmarks in the country, Frankfurt is the kind of city where you can easily get neck-ache from constantly looking up to admire the views. Frankfurt's stunning skyline provides many fascinating landmarks and monuments, making it one of Germany's most aesthetically pleasing cities.

The Frankfurt Post Office Tower is particularly eye-catching and dominates much of the area, offering a popular observation deck and superb cityscape views, while for others, the famous Main Tower and Commerzbank building are equally impressive. Frankfurt's main landmarks are below. 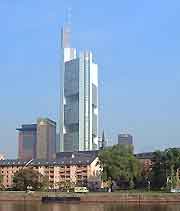 Address: Kaiserplatz 1, Frankfurt am Main, D-60311, Germany, DE
Tel: +49 069 2123 8849
Packing in a mighty 53 storeys, Frankfurt Commerzbank is hailed as Europe's tallest building and can be clearly seen from across the city, towering above the skyline. One of the city's most noteworthy landmarks, this magnificent structure was designed by Sir Norman Foster and is famous for being the first ecologically-friendly office tower in the world, due to its low levels of energy consumption.
Open hours: daily
Admission: no charge

Address: Kaiserstrasse 29, Frankfurt am Main, D-60311, Germany, DE
Tel: +49 069 2123 8849
Frankfurt's Eurotower is home to the headquarters of the European Central Bank (ECB), one of the most important economic organisations in the EU and the body responsible for safeguarding the value of the Euro. Although the ECB is housed in just another large skyscraper, visitors should appreciate that its actual contributions are far greater than to those made to the Frankfurt skyline.
Open hours: daily
Admission: no charge 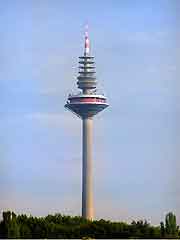 Address: Kaiserstrasse 29, Frankfurt am Main, D-60311, Germany, DE
Tel: +49 069 2123 8849
Located in the district of Ginnheim, this 330-metre / 1,083-foot high communications tower has graced the city's skyline since 1978, when its construction was completed by the German post office (Deutsche Post). The locals refer to it as 'asparagus tower' on account of it size and shape. However, in reality, its 3,000 tons of steel and 20,000 square metres of concrete bear only a passing resemblance to the vegetable. Visitors can ascend to the viewing platform on which there is a restaurant and even more surprisingly, a nightclub.
Open hours: Monday to Friday - 12:00 to 20:00
Admission: no charge 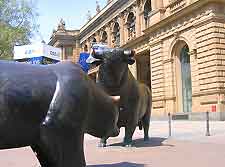 Address: Kaiserstrasse 29, Frankfurt am Main, D-60311, Germany, DE
Tel: +49 069 2197 383
Claiming the title of the third-biggest stock, share and foreign exchange market in the world, the Frankfurt Stock Exchange is often known simply as the FSE and has become an integral part of both the city's heritage and its ongoing daily business activities. The landmark building is a High Renaissance style construction dating back to the latter part of the 19th century and is therefore interesting from both aesthetic and historical perspectives. Visitors are permitted to view the spectacle that is the daily trading action from a balcony above the trading floor.
Open hours: Monday to Friday - 09:00 to 17:30
Admission: no charge

Address: Neue Mainzer Strasse 52-58, Frankfurt am Main, Germany, DE
Tel: +49 069 2123 8849
A little short of 200 metres / 655 feet high, Frankfurt's Main Tower is the city's fourth-largest building and one of the best-known skyscrapers gracing its skyline. Visitors are offered the chance to ascend to the building's viewing platform, from where some fantastic views over the city are available. The neighbouring Commerzbank Tower and Europaturm buildings can also be seen clearly from the Main Tower.
Open hours: daily
Admission: charge