Frankfurt is split into a total of nine recognisable districts, with each offering its own distinct personality and appearance. Visitors to Frankfurt will find something of interest in all districts, but the Alstadt, Bockenheim, Bornheim and Sachsenhausen neighbourhoods offer the widest selection of tourist interests and general appeal.

Otherwise known as Frankfurt's Old Town quarter, the historic Altstadt district is full of character and its museums and shops are particularly popular, while for others, the Bahnhofsviertel area and its red light district is worth a look for its curiosity value alone. The main districts and neighbourhoods are below. 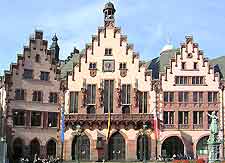 Largely destroyed in Allied bomb raids in WWII, the Old City was reconstructed and is now home to a reasonable selection of visitor sights, including the Goethe Museum, Paulskirche, Leinwandhaus and Römer. There are also several good shopping centres within this part of the city, the best of which lie along both the Grosse Bockenheimer Strasse and Rahmhofstrasse. 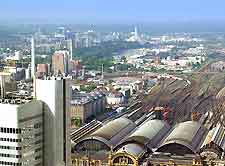 Known as the Station quarter, this district is a small and sparsely populated area, featuring a number of good entertainment venues and clubs. While famous among many for its thriving red light district, it is also home to a good selection of bars and restaurants.

Bornheim is an eclectic mix of traditional old-fashioned pubs and corner shops with exclusive bars and designer boutiques. Consequently, its resident and visiting populations are from a wide range of social backgrounds. It is in this part of Frankfurt that you will find the spring and autumn festival known as Dippemess, which always draws large crowds and features plenty of fairground attractions. 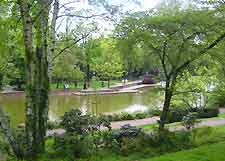 Frankfurt's Johann Wolfgang Goethe University and its 35,000-strong student population have ensured that this district is geared very much towards the younger generation. Highlights within city's Bockenheim area include innumerable trendy bars, cafés and public houses.

Incorporated into the city in the late 1902s, the Höchst district is something of a cultural centre and can become busy at times. Venues such as the Neues Theatre Höchst and huge Jahrhunderthalle concert hall provide its residents and visitors with a varied selection of artistic performances and conferences.

Nordend is the most populated of the city's districts and is a particularly beautiful area of Frankfurt, being shared by rich businessmen and students alike. A varied selection of eateries (German and international), shops and public houses can be found here.

A predominantly business-oriented district within Frankfurt, Westend lies amid the city's mighty skyscraper collection and is typified by banks, offices and exclusive apartment blocks. The Westend district is often especially busy during the week, as local workers go about their day to day business.

Previously an industrial area that had been left to rot, Ostend is now considered 'des-res' with its influx of trendy young companies, entertainment venues and attractive residential properties.

An old district with traditional businesses and residences, Sachsenhausen offers plenty of charm and atmosphere. Visitors will find it culturally-rich with venues such as the Städel Museum, Museum of Ethnology and National Film Museum.