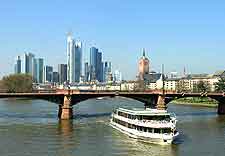 Frankfurt is a visually striking city and it is for this reason that many of its best tourist attractions are based around places of architectural and aesthetic interest. Guided tours of the city give visitors the chance to see its many fascinating sights and learn some compelling facts about Frankfurt's past.

However, if you've got kids, then a trip to the Frankfurt Zoo is probably more up their street, where a range of animal attractions can be found housed in landscaped enclosures. The main tourist attractions within Frankfurt are shown below. 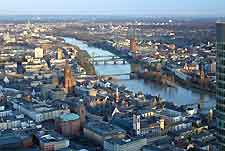 Address: Main River, Frankfurt am Main, Germany, DE
Tel: +49 069 13 3837
Visitors can take a standard one-hour cruise along the River Main, which passes many of the city's sights and gives a fresh perspective on its skyline and architecture. Alternatively, it's possible to take a day-long cruise from Frankfurt to Aschaffenburg, taking in castles, churches and other architectural treasures along the way, together with a variety of wildlife attractions, including beavers, otters and swans. The boat stops for several hours in Aschaffenburg to allow visitors to do some shopping.
Open hours: weekends and public holidays only
Admission: charge 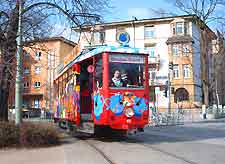 Address: Alfred-Brehm-Platz 16, Frankfurt am Main, D-60316, Germany, DE
Tel: +49 069 2132 2425
Known to locals as the Apfelwein Express, the Apple Wine Express is a traditional old-fashioned streetcar that tours the city, starting from Frankfurt Zoo and lasting about an hour in duration. The tram takes in most of the city's major sights and attractions, and all those riding it are given pretzels and a glass of apple wine (juice for kids), which is included in the cost of the actual tour.
Open hours: weekends and public holidays only
Admission: charge 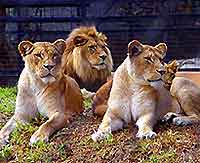 Address: Alfred-Brehm-Platz 16, Frankfurt am Main, D-60316, Germany, DE
Tel: +49 069 2123 3735
Hailed as one of the best facilities of its kind in Europe, Frankfurt Zoo is centrally located, making it an ideal first stop for a day out for families staying downtown. The zoo has an extensive collection of animals, including specimens from every continent on the planet. The big cats area and the seal enclosure are among the more popular attractions, while the highlight of the zoo for many visitors is the Grzimek House, an enclosure that mimics the natural darkness of the night, allowing visitors to view nocturnal animals in their woken state.
Open hours: daily - 09:00 to 19:00
Admission: charge

Address: Domplatz 1, Frankfurt am Main, D-60313, Germany, DE
Tel: +49 069 29 70 3225
This magnificent piece of architecture has its earliest origins from as far back as 680 AD, with its current form dating back to the 13th century. The cathedral is named after St. Bartholomew on account of it containing his skull, which was donated by the papacy and is available for viewing on Sundays, holidays and of course, on St. Bartholomew's Day itself.
Open hours: weekends and public holidays only
Admission: charge