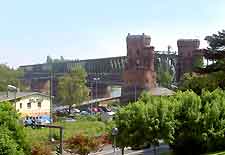 When you've had your fill of the many attractions within the city of Frankfurt, you will find plenty of excellent excursion possibilities and nearby areas worthy of exploration. Attractions within easy reach of Frankfurt include the restored Roman fortress at nearby Saalburg, the casino, palace, spa and health resort in Bad Homburg, and the historic Eberbach Abbey in the very centre of Rheingau, close to many vineyards and areas of woodland.

For those looking for cultural attractions, the museums, galleries and historic architecture located within the neighbouring cities of Mainz, Darmstadt, Hanau, Offenbach Am Main and Wiesbaden won't fail to please. The most notable attractions nearby Frankfurt are below. 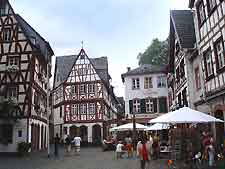 A vibrant and exciting city some 40 km / 25 miles to the west of Frankfurt, Mainz features an excellent selection of traditional taverns, which serve a good selection of locally produced wines. Mainz stands alongside the Rhine River and apart from its taverns and eateries, other attractions include a striking cathedral, various churches and a number of museums, such as Gutenberg Museum, the Museum of Ancient Navigation (Museum für Antike Schiffahrt) and State Museum (Landesmuseum Mainz). 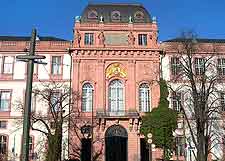 An inviting city sited around 34 km / 21 miles to the south of nearby Frankfurt, Darmstadt is known for its artistic accomplishments and was actually the birthplace of Art Nouveau, as we know it today. Darmstadt is within easy reach of Frankfurt and those with an interest in all things Art Nouveau will enjoy the many stylish attractions and exhibits at Darmstadt's Museum Künstlerkolonie, while the Ausstellungsgebäude Mathildenhöhe art gallery will no doubt also be of interest.

Lying around 19 km / 12 miles east of Frankfurt, the moderately sized town of Hanau was founded in the 12th century and suffered severe damage during WWII. Visitors to Hanau will find that the main attractions include the acclaimed German House of Goldsmiths (known locally as Deutsches Goldschmiedehaus), the historic Philippsruhe Castle, and also the beautiful St. Mary's Church. 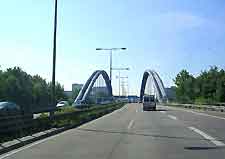 Located on the very eastern outskirts of Frankfurt, a mere 8 km / 5 miles from the city centre, Offenbach Am Main can be found on the southern banks of the River Main. A small city with many cultural attractions, Offenbach Am Main is known for its leather industry and this important past is celebrated within its German Leather Museum and Municipal History Museum. The seasonal matches and events at the Bieberer Berg football stadium are also worth looking out for, as is the 16th-century Isenburg Castle and its imposing Renaissance-style facade. 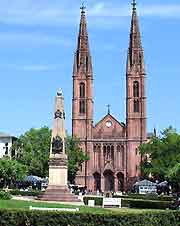 A rapidly expanding city just 38 km / 24 miles west of Frankfurt, Wiesbaden has a population of around 280,000 people and plenty to offer in the way of tourist attractions. Amongst the main highlights, Wiesbaden is home to a particularly impressive palace square, which is known locally as the Schlossplatz and dominated by both the Ducal Palace and the new Town Hall. Other attractions in Wiesbaden include its funicular railway, its many Neoclassicist buildings, and its famous thermal springs, which are purported to date back to Roman times.