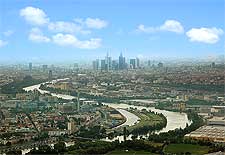 The first mention of Frankfurt in official history records dates to 794 AD. It was noted that Franconovurt, or 'City of the Franks', was the meeting place for an important ecclesiastical council of Franconian noblemen led by Emperor Charlemagne (Charles the Great).

Certainly, by 822 AD, Frankfurt had grown to become an important royal palatinate, a place where parliaments were held. Emperor Ludwig Pious ordered that the city's most important residences be renovated. 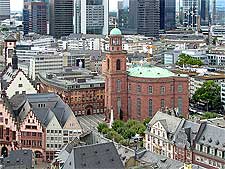 The city's royal connections continued throughout the Middle Ages. There is evidence that, in 1074, a royal tariff was imposed. Frederick I, a Holy Roman Emperor known as 'Barbarossa', was elected to be King of Germany here.


Frankfurt in the Middle Ages was a lively city. It had an annual Autumn fair from as early as 1150. By the mid-13th century, the city had started to gain a reputation as an international trade fair centre. This was helped considerably when powerful Frederick II granted visitors safe passage to Frankfurt.

In the year of 1241, tax records document the fact that this was the most profitable city within the whole of Germany. In 1372, Frankfurt had made such a name for itself that it was granted the title of 'Free Imperial City'. As a member of the Reichstag, it was essentially a self-governing entity, answerable only to the Emperor himself.

In 1478, book merchants arrived in the city for their very first 'Frankfurt Fair'. It was to be the start of a connection between the city and the world's publishing community that continues to this day. In the 15th century, the fair also dealt with weapons, textiles and some spices.

The creation of a 'bourse' (stock exchange) here in 1585 meant that the city now had its own means of controlling and exchanging money. By this point in its history, Frankfurt had become one of Germany's most affluent and important trading centres. 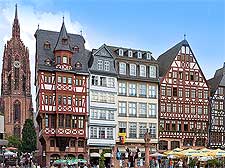 A Time of Change

The 17th century was a time of immense change in Frankfurt. There was social unrest, much of which was very much aimed at the city's Jewish community. Then, during the Thirty Years' War, the city was occupied by a Swedish garrison. The revocation of the Edict of Nantes opened the city's gates to a flood of Huguenot refugees.

By the end of the 18th century, its royal ties were all but broken. In 1792, the final imperial coronation was to be staged here. The city's role as a military stronghold was also brought to an end. In 1804, work began on demolishing Frankfurt's fortifications and the remaining ground was transformed into lush parkland for the use of the city's inhabitants.

The 19th century saw Frankfurt emerge as a modern city. In 1839, a railway line was built to connect both Wiesbaden (west) and Hochst (south-east), thus establishing the city's potential as a main rail junction. In 1888, its main railway station was officially opened to the public. 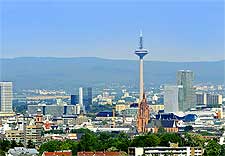 By the opening years of the 20th century, Frankfurt was home to some 400,000 people. It was a modern trade and industrial centre. In 1914, the Goethe University of Frankfurt was founded, being named after one of the city's most famous sons, German writer and physicist Johann Wolfgang von Goethe, who was born here in the summer of 1749. The university subsequently flourished and nowadays boasts a student base of almost 40,000.

After the end of World War One, an up-and-coming urban planner, Ernst May, was commissioned to create the 'New Frankfurt'. However, many buildings in the city were to be destroyed during World War Two, when Allied bombing raids laid waste to large parts of the old city centre. Frankfurt was briefly occupied by US forces. Then, in 1947, it was selected to become the headquarters for the unified occupation zones of the French, the British and the Americans. 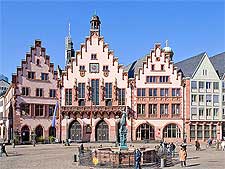 In 1949, Frankfurt failed to be voted in as the capital of the Federal Republic of Germany. Nonetheless, the city continued to grow steadily and solidly. In 1957, it became the home of the Deutsche Bundesbank, which began to operate in that year.

More recent developments in the city include the opening of a subway line in the late 1960s, the construction of the Messeturm skyscraper in the late 1980s and, in 1997, the building of the somewhat contemporary Commerzbank Tower, which still ranks amongst Europe's tallest office towers. Together, they make up the city's distinctive and rather eclectic skyline.